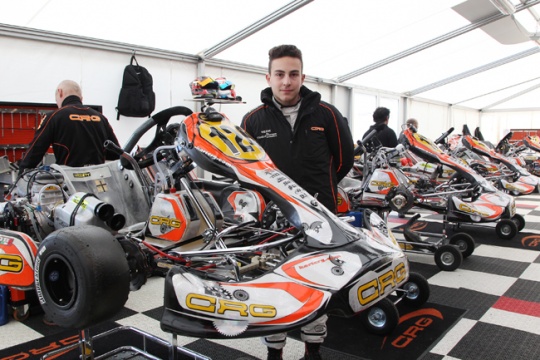 Press Release by: CRG
CRG is ready to run another good race at the South Garda Karting of Lonato in the 20th Winter Cup, event where the team already won 9 times. An attack lineup to be fielded in KZ2 and KZ, CRG also present in Mini Rok.
The renewed CRG racing team is ready to face its first round of season 2015: the 20th Winter Cup of Lonato, an event that will have 250 drivers at the start among which the most representative ones on the international karting scene. In the 20 years of the event, CRG secured 9 wins since 1996 when Tonio Liuzzi triumphed in 100 ICA on CRG chassis, at the time also by CRG engine.
The most recent success obtained by CRG at the Winter Cup dates back to only two years ago when Max Verstappen dominated KF2 in 2013. CRG is awaited as a protagonist in Lonato, especially in the most performing category, KZ2, but also in KF where the Italian outfit has high expectations.

DE CONTO HUNTING FOR ANOTHER SUCCESS IN KZ2
CRG drivers will be at the start with the new chassis of the Italian outfit pushed by the latest evolution of the Maxter engine in KZ2. High hopes are put on the new CRG driver Paolo De Conto, who is ready to repeat the success obtained last year, and on the new entries Simo Puhakka and the 16 year old Fabrizio Rosati. The works team will also field three German drivers: Luca Ficher, Niko Herpic and Marvin Langenbacher. The KZ2 European reigning Champion Andrea Dalè, will make it to the track with CRG as privateer, while Davide Forè will be supported by Renda Motorsport on CRG-Tm in this occasion. Among the other private drivers racing on CRG, the Swiss Andrè Reinhard will be on track with team Berner Kart Racing, the American Christian Schureman, CRG Holland will field Lars Lamborelle, Modena Kart will line Mauro Simoni up, and Pujolar Racing the Spaniard Toni Forne Tomas.

TIENE AND HILTBRAND CHARGING IN KF
Felice Tiene and Pedro Hilterbrand, both on the podium last year in the Winter Cup respectively in second and third place, will chase the success for CRG in KF. They will be joined by Dionisios Marcu and by the Briton Archie Tillett who will be at his debut in this higher category. The Dutch team CRG Keijzer Racing will also be on track fielding the Norwegian Lars Solheim and the Dutch Martijn Van Leeuwen, who ended second in KF3 in 2013. Team PFI International will also be on track on CRG chassis with the British driver Mark Litchfield.

THE VERY YOUNG OF MINI ROK WITH CRG
Team Gamoto will field its full lineup in Mini Rok with great chances to make CRG colors shine. The team led by Vincenzo and Salvatore Gatto will line up the recent winner of the WSK Champions Cup Dennis Hauger, and then Leonardo Marseglia, Souleimane Zanfari, Egor Litvinenko, Mac Queen and Adam Putera. On track on CRG chassis also the Swiss Elias Peter and Leandro Anderruti, team AB Motorsport will field Francesca Raffaele and Leonardo Bizzotto, as well as the young and promising driver Mathias Torreggiani.

The 20th Winter Cup of Lonato could be followed through Live Timing and Live Streaming on internet at the website www.southgardakarting.it.