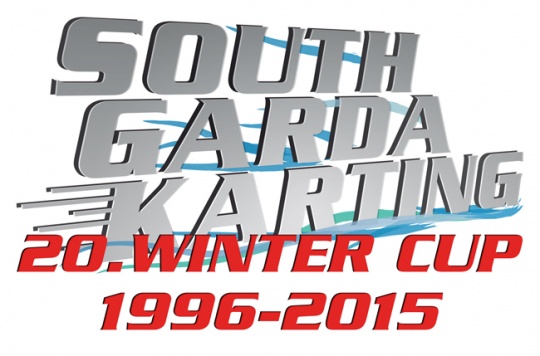 Press Release by: South Garda Karting (Lonato)
The Winter Cup to be held next 19-22 February 2015 at South Garda Karting of Lonato del Garda (Brescia, Italy) celebrates its 20th edition, an important event that recalls the history of this race and of International Karting of the past 20 years.
This edition has been enriched by the validity as first round of the International Trophy Bridgestone Supercup.


The Winter Cup got birth back in 1996 on the stunning circuit of Lonato del Garda by the will of the building Surveyor Angelo Corberi, who designed and funded the racetrack built in 1988 that has housed the most important national and international events since, including CIK-FIA World and European Championships.

The first appointment with the Winter Cup 1996, race that up to that point had the denomination of Italy Cup, was a consequence of the agreement with the most important Outfits of the time to run an international race following CIK regulations on this track, ahead of the FSA and FA World Championship scheduled in Lonato on the 15th of September of the same year. From the following year, the Winter Cup has been the traditional opening to the sporting season and this status of first important race of the year has soon made it a very sought after and important event for all constructors fielding their works teams and for the strongest teams that take this occasion as a first chance for a real technical and sporting comparison with rivals. This is not just a race then, but an interesting test to check everyone's potential ahead of the new international season.

A lot of champions have managed to secure the Winter Cup during the past 20 years, some of them climbed the sport's ladder all the way to Formula 1. Born in 1996 with the three categories 100 Junior, 100 ICA and 100 Formula A, the Winter Cup has been housing four categories in 1997 as it was also opened to 100 Formula Super A, that at the time was the “queen” international category reserved to professional drivers. In 2003 CIK-FIA abandoned Formula Super A and the Winter Cup was back to the three categories of 100, that later on changed their name to KF3, KF2 and KF1 in 2007. For two years, starting with 2009, KF1 was replaced by Super KF. In 2011 the Winter Cup housed three classes as the shifter category KZ2 joined for the first time KF3 and KF2. The smallest karting category Mini of the single branded Rok Vortex will be part of the 2015 event celebrating its 20th edition.

Over the years, the success of the Winter Cup has been confirmed by the high number of entered drivers, that soon reached level 200 and that broke the 300 marks three times, as year 2000 set the current record of 368 verified drivers. The 20th edition of the race in 2015 also announces to be packed with 250 drivers on track!

Among the drivers with the Winter Cup in their past that managed to get to Formula 1, we can cite Tonio Liuzzi, Jenson Button, Giorgio Pantano, Jules Bianchi, Robert Kubica, Lewis Hamilton, Nico Rosberg, Sebastian Vettel, Sebastian Buemi, Niko Hulkenberg, Giedo Van Der Garde, Daniil Kvyat, Max Verstappen and Carlos Sainz Jr. The South Garda Karting Circuit is currently one of the favourite venues of Formula 1 and Moto GP drivers for testing and training.

THE WINTER CUP OVER THE YEARS

1996. The first edition of the Winter Cup was won by one of the valued Italian drivers, Vitantonio Liuzzi, who moved to Formula 1 shortly after. In 1996 Liuzzi triumphed in category 100 ICA on the legendary chassis Kalì-Kart pushed by the engine made by the constructor CRG. The first edition of 1996 also comprised the categories 100 Junior, won by Oscar Tami on Tibikart-Vortex, and the 100 Formula A  won by Natale Maggio on Tony Kart-Vortex.

1998, 222 drivers. Marco Ardigò made his appearance on the international karting scene in 1998, before securing four world titles, three World Championships and a World Cup. In 1998, a very young Ardigò competed in category 100 Junior and won the Winter Cup on CRG chassis pushed by CRG engine. Robert Kubica took part in the Junior race. Francesco Basilico (Top Kart-Comer) won the 100 ICA, the American Patrick Long (CRG-CRG) 100 Formula A, while Roberto Toninelli repeated his victory in Formula Super A, this time on CRG-CRG.

1999, 271 drivers. Marco Ardigò got another victory, this time in the higher category 100 ICA, again on CRG-CRG. The Swede Stefan Sodergberg (Tony Kart-Vortex) took the victory in 100 Junior, as Nico Rosberg was also on track and obtained the third quickest time in qualifying. Robert Kubica ended third in the Final instead. The Brazilian Augusto Farfus dos Santos Junior (CRG-CRG) got the victory in 100 Formula A, before becoming a champion in Touring Cars, WTCC, DTM and 24 Hours of Le Mans. Ronni Quintarelli (Tony Kart-Vortex) took the victory in 100 Formula A before continuing his motor-racing career in Japan.

2000, 368 drivers. The 2000 edition of the Winter Cup set the record in terms of verified drivers: 368. The victory in 100 Junior went to the Dutch driver Carlo Van Dam on Trulli chassis and Vortex engine. The victory of 100 ICA went to Davide Gaggianesi (CRG-CRG), that of 100 Formula A to the Dutch Nelson Van Der Pol (Tony Kart-Vortex), as Davide Forè (Tony Kart-Vortex) claimed the win in 100 Formula Super A, a prelude to the 5 world titles under his belt. The Dutch driver Van der Garde (10th) was also on track in Formula A. Two years after he went on to take the title of FSA World Champion and from 2007 he became F1 driver.  The Finnish driver Tony Vilander (2nd) came to the fore in FA before becoming a Ferrari driver in the GT World Championship.

2001, 274 drivers, 20 countries. The 100 Junior victory went to Filippo Tedeschini (CRG-Parilla), that of 100 ICA to the Dutch driver Bart Kramer (Tony Kart-Vortex), while the Briton Ben Hanley (Kosmic-Vortex) won the Formula A title before making significant experiences in motor-racing. Mauro Piu (Haase-Titan) took the win in 100 Formula Super, as the German Sebastian Vettel made his debut in 100 Junior, getting the podium of the Winter Cup with the third place. In the same year Vettel won the ICA Junior European Championship. In 2006 Vettel made his debut in F1 setting the record for the youngest driver (19 years of age), Max Verstappen crashed then his record in 2014 (17 years). F1 Vettel won four F1 World Titles with Red Bull and  is Ferrari F1 driver in 2015. Nico Hulkenberg (fifth in the Final) was also present in 100 Junior at Winter Cup of 2001, before making his F1 debut in 2010. Some other future F1 drivers made it to the track in FSA, closing their efforts in the top ten of the Winter Cup: Lewis Hamilton was in fact seventh and Nico Rosberg tenth.

2002. The 100 Junior went Matteo Chinosi's ways (Maranello-TM), while the Italo-Swiss Edoardo Mortara (Tony Kart-Vortex) won the 100 ICA title, before moving to motorsport in Formula Renault, F3 series in which he won twice at Macau, GP2 and DTM. Andrea Tressino (Top Kart-Rotax) took the victory in 100 Formula A, while another protagonist of international karting, Sauro Cesetti, won Formula Super A on Kosmic-Vortex. The third place went to the Estonian Marko Asmer, who later on became F1 test-driver for BMW-Sauber.

2003, 224 drivers, 23 countries. From 2003, the Winter Cup was back to three categories as the Formula Super A closed its cycle in international CIK-FIA championships. The top step of the podium of 100 Junior went to Andy Zanella (Top Kart-Comer), while the Briton Oliver Oakes (Tony Kart-Vortex) won 100 ICA and Davide Forè (Tony Kart-Vortex) the 100 Formula A, taking his second win at the Winter Cup.

2004, 273 drivers. Three years after the first win, the British driver Ben Hanley won again in Formula A, while  Alessandro Ruggeri (Italsistem-Italcorse) claimed the victory in 100 Junior and the Finnish driver Atte Mustonen (Birel-Tm) that of 100 ICA.

2005, 318 drivers. The Winter Cup of 2005 saw 318 drivers on track. The victory in 100 Junior went to the Spanish driver Roberto Mehri while that of 100 ICA to Simone Brenna. Ben Hanley won Formula A, again on  Maranello-Maxter, winning three Winter Cups and acquiring the status of most victorious driver of this event.

2006, 304 drivers, 30 countries. The number of entered drivers of the 11th Winter Cup broke again the wall of 300. Sauro Cesetti completed his personal one-two winning 100 Formula A on Birel-Tm. Birel obtained a one-two-three for the second year in a row thanks to the victory of Luca Genini in 100 Junior and that of the British driver Ollie Millroy in 100 ICA. Jules Bianchi was also on the podium of Formula A, in second. The French driver has then been competing in Formula 1 until the unlucky incident he had in 2014.

2007, 210 drivers, 23 countries. The Swede Vktor Oberg (Gillard-Mrc) won the KF3 Winter Cup in 2007, while the Belgian Yannick De Brabander (Maranello-Parilla) took the victory in KF2, and the Dane Michael Christensen (Gillard-Parilla) that of KF1.

2008, 283 drivers, 29 countries. The Winter Cup reached another important goal in 2008 recording again an high number of drivers: 283. The Finn Aaro Vainio came to the fore on the international scene winning the event in KF3 (Maranello-Xtr). KF2 was won by the Briton Rob Foster Jones (FA Kart-Vortex) and KF1 by Yannick De Brabander, this time on Intrepid-Tm.

2009, 243 drivers, 32 countries. Two young champions made their appearance at the Winter Cup of 2009, winning respectively the KF3 and KF2 Finals. The Russian Daniil Kvyat (Tony Kart-Vortex) claimed the victory in KF3, some 5 years before making his debut in Formula 1, while the French driver Brandon Maisano (Intrepid-Tm) won KF2 and in 2010 moved to Formula Abarth becoming part of the Ferrari Driver Academy. Carlos Sainz Jr also got a good result in KF3 ending fifth. In 2015, he will make his debut in Formula 1. Raffaele Marciello, another raising star of international motorsport, was second in KF2. The British driver Gary Catt (Tony Kart-Vortex) won the Super KF category.

2010, 246 drivers, 32 countries. The Russian Egor Orudzhev (Intrepid-Tm) won the KF3 race, but this edition of the Winter Cup recorded the debut of Max Verstappen (CRG-Maxter) who managed to get on the podium in P2. Four years later, Verstappen was to debut in European F3 and in F1 with Toro Rosso at the end of the season. The Swiss driver Michael Heche, also on Intrepid-Tm, won the KF2 Final, while the Super KF Final went the Czech Toman Libor's ways on Birel-Bmb.

2011, 243 drivers, 30 countries. The Norwegian Dennis Olsen (Energy-Tm) won KF3 in 2011, as Max Verstappen came second again. The Finn Teemu Sunineen won KF2 on Maranello instead. The Czech driver  Patrick Hajek came to the fore with the victory in KZ2, the shifter category for the first time present at the Winter Cup. The race had an all Tony Kart-Vortex podium as Rick Dreezen was second and Marco Ardigò third.

2013, 239 drivers, 36 countries. Some other big names emerged from the 18th edition of the Winter Cup in 2013. Alessio Lorandi (Tony Kart-Vortex) of team Baby Race won the race in KF3, before taking the World Championship at the end of the season. Max Verstappen, back to CRG, secured the second victory at the Winter Cup in KF2 in the year when he virtually won everything that was out for grabs: the KZ World Championship, the European KZ and KF Championships and the WSK titles. The young Monegasque Charles Leclerc won the trophy in KZ2 with the new team Art GP instead.