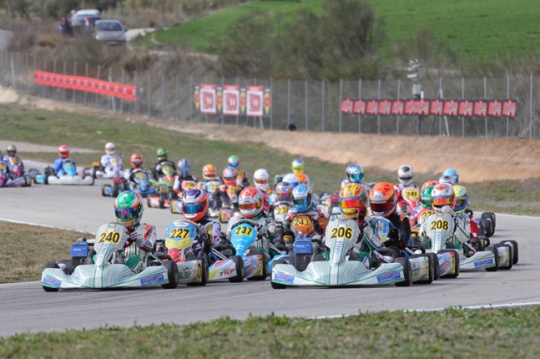 Press Release by: RGMMC
From 9th to 15th February 2015, the traditional ROTAX Winter Cup kicked off the year's first trial of strength. For the sixth time this prestigious karting event welcomed the international ROTAX scene to Campillos near Malaga.
Over 100 drivers from over 25 nations coming from all over the world entered the event, turning the Winter Cup into a small world championship with the highest level of competition. In addition to winning the prestigious title of the Winter Cup champion 2015 there were valuable prizes waiting for the drivers. In each class the winner was given a free season in the Euro Challenge 2015, while the runner-up got two free races and the third placed driver one free round.

Juniors: Tom Gamble wins exciting Final
In the final Dean MacDonald suffered a setback. At first he could take the lead again, but soon he lost pace and positions, finally ending the race in tenth position. So it was Leonard Hoogenboom who gained the top quite a few laps until he had to deal with the UK drivers Jack McCarthy, Tom Canning (Dan Holland Racing) and Tom Gamble. Finally the pressure was too big and he fell back to fourth position. On the top Gamble asserted himself in the leading role and managed to defend it up to the finish line. McCarthy followed close behind in second place ahead of Canning, completing the podium positions.

Seniors: Pierce Lehane unbeatable
In the final Pierce Lehane could not repeat his win easily. He got a lot of pressure from behind during the 15 laps of the race distance but coped with it bravely. While Richard Verschoor and Denis Mavlanov were pushed back to fourth and fifth positions, Brett Ward (Aim Motorsport) and the reigning European junior champion Thomas Preining (Team TKP) were in best shape. The duo was close on Lehane's heels and made for a real photo finish. In the end Lehane took the victory by a winning margin of only 0.043 seconds ahead of Ward and Preining.

DD2: Double Win for Ferenc Kancsar
Ferenc Kancsar had an easy job in the final. The man from Hungary drove a solid race without any pressure from behind. After 15 laps he complemented his double success by a leading gap of almost two seconds. Behind him Luka Kamali was able to keep the second place for a quite long time. But at halftime he lost ground persistently, leaving the second place to his teammate Paolo De Conto. Kamali tried to save the third place up to the chequered flag but on the last metres Spain's Oriol Dalmau (Energy Spain) conquered the last podium position on home soil. As for the Masters classification Cristobal Garcia Ramos could not repeat his prefinal victory. After five laps he had to end the race, leaving way to Marc Berteaux (Sologne Karting). The Frenchman took the win ahead of Cristiano Morgado and Geza Fodor from Hungary (Ricciardo/KMS).