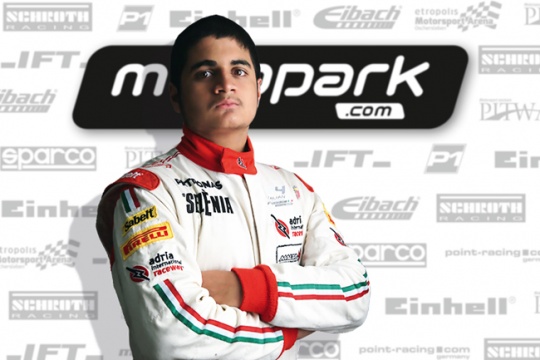 Press Release by: P1 Racing Services
Team Motopark adds even more international flavour to the European Formula Three Championship by signing up Indian Mahaveer Raghunathan.
He had one of the longest flights and yet is one of the youngest drivers in next season’s European Formula Three Championship: Indian Mahaveer Raghunathan will contest the series in a Dallara entered by German Team Motopark.
At barely 16 years of age, Raghunathan in just about young enough to compete in grown-up auto racing. He started his career in domestic karting but already got a taste of a real race car when testing a Formula BMW on India’s Formula One race track, the Buddh International Circuit.
After having his toe into the water in his native India, Raghunathan moved to Italy in 2014 to compete in the all-new Formula Four series. At the same time, he started testing Formula Three for various teams. „The Italian beginner formulae haven turned out a very good breeding ground for young talents,“ says Timo Rumpfkeil, team principal of Team Motopark. „For Mahaveer Raghunathan to cut his teeth there shows how determined he is to make it to the top – and convinced us that we can turn him into a force to be reckoned with in F3.“

Mahaveer Raghunathan: "I look forward to making the next step on the motor-racing ladder with a team like Motopark. I enjoyed the testing sessions with the Motopark  team who made sure I would be comfortable driving the car and were with me in every step. FIA Formula 3 European Championship would be a challenge for a young rookie like me and I plan to give my best , focussing on every race."