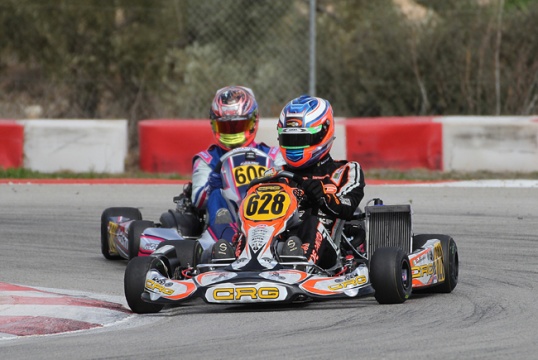 Press Release by: CRG
Paolo De Conto claimed the second place in the DD2 opening race in Campillos. Very good P4 for Kamali. Some bad luck slowed down the other CRG drivers in Senior and Junior instead.
CRG's first exit in occasion of the Rotax Max Challenge of Campillos (Spain) has been celebrated with the first podium by Paolo De Conto in DD2, in a season opener that turned out to be quite handy for drivers to set up their machines ahead of the Euro Rotax races.

STRONG PERFORMANCES BY DE CONTO AND KAMALI
As expected, Paolo De Conto has been among the main protagonists of the Spanish weekend despite this being his debut race with CRG. In Campillos, De Conto did not manage to put in a great lap time in qualifying due to the traffic and he kept the sixth time set in qualifying after the heats too. He later on confirmed P6 also in Prefinal, despite setting the fastest lap of the race.

De Conto put in his masterpiece in the Final though, as he started an attack race following a not great start, closing his effort with a well deserved P2. He set again the fastest lap of the race, which highlights the competitiveness of the Italian driver and that of the CRG chassis he was on.
The German driver of CRG Luka Kamali also scored a great result in DD2. He took fourth in qualifying practice, was fourth again after heats and improved his position in Prefinal claiming an excellent P3. He put in a bold performance in the Final too, as he just missed out on the podium. In fact he had to settle for P4 crossing the line just two tenths shy of the Spaniard Oriol Dalmau. The race was won by the Hungarian Ferenc Kancsar. The two Russian drivers of CRG, Semen Ryasnov and Igor Mukhin (DD2 Master) ended the Final respectively in P22 and P26 after putting in some good performances in the heats.

SENIOR AND JUNIOR HIT BY BAD LUCK
In Senior, CRG drivers struggled to find the right setup in qualifying practice, which penalized the result of their heats as they were forced to start from the back of the grid. The British driver Ed Brand ended Prefinal in P16, proceeding team mates Mauricio van der Laan – the Spanish driver being at his debut in Senior –  and the other Briton Harry Webb. The best result among CRG drivers was secured by Van der Laan, who crossed the finish line in 13th position, while Brand was 16th and Webb 18th. The Final went the Australian Pierce Lehane's ways.

In Junior, the young British driver Alex Quinn, the Spanish Killian Meyer – at his debut in Junior –  and the Israelian Ido Cohen managed to qualify for the final stages for CRG, while the German  Phil Doerr had to conclude his effort after an unlucky second chance race. The Spanish driver Meyer was the best of this lot in Prefinal, as he ended 14th, while Cohen was 20th and Quinn was stopped by an incident at lap one.
He was then involved in another incident in the Final, while other inconveniences slowed down the other two CRG drivers as Meyer ended in 28th position and  Coeh in 31st.

This Spanish exit has been quite fruitful for all CRG drivers though, as this has been a good test ahead of the four races of the Euro Rotax scheduled for next 5 April in Sabris (France),  31 May in Castelletto (Italy), 26 July in Wackersdorf (Germany) and 6 September in Genk (Belgium).