Author: Vroomkart International
CIK-FIA European KZ1-KZ2 Championship
Circuito Internazionale Napoli, 11/04/2010
At first glance the epilogue of the first round of the European gear class championship seems to be evident. Instead the final results are the results of an exciting sequence of unpredictable events

The first stop of the international CIK season underlines the skill of Jeremy Iglesias and Bas Lammers, the duo who already dominated in KZ1 last year, and an 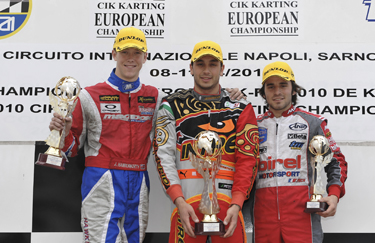 Italian Paolo De Conto in KZ2.
Points gained enable the protagonists in Sarno to tackle the second decisive round more at ease. The Dutch driver once again responds to the forcasts on the eve of the event, racing up front and matching skill with Iglesias seeing that the likes of Thonon, Forè and Ardigò weren’t present… During the first final, suffered the consequence of a wet track after a sudden burst of rain just after the start. An sudden change even if it was expected, which was penalising especially for Ben Hanley, one of the favourites for final victory, judging by results in qualifying heats. A carb problem, because it had been set for a dry track took British Maranello driver to an early exit despite his front row grid place next to Lammers. The Dutchman grabs flag sixth, while Iglesias cuts through to win. Lammers makes up during heat 2, while Iglesias defends himself from Renaude’s attacks and is runner up place, which places him at the top of the championship scoreboard. we’ll see what happens in Varennes, France, at the end of June. We expect to see confirmation on behalf of Maddox standard-bearer, Hawksworth and Renaudie, who stand a good chance of ending on the European championship podium.

The final phase of KZ2 is more exciting; with r 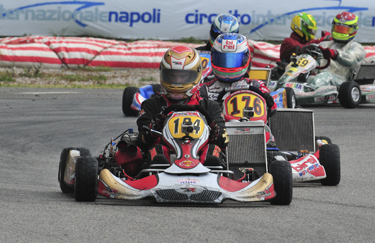 ace 1 held on a wet track that conditioned Tilloca’s position, not so used to racing with the set of rain tyres. So De Conto steps into the lead… the race gets very exciting as it draws to an end with Jeleniowski and a very fast Soldat who start duelling hard on the edge of the track. During the final Jeleniowski makes the most of the pile up created by a very determined Solgat and slips into first, after the last turn, De Conto too comes up and grabs second place in extremis. The battle started by Solgat is breathtaking.
In race 2, with the dry track, we expected a different sort of race. And that’s what happened. After a few laps Tilloca is behind Jeleniowski second, to cover De Conto’s escape. The German closed all the gaps but at the braking point along the straight in Sarno, Tilloca is inside next to Energy standard bearer, but incredibly as he comes round the turn, on exit he suffers electrical problem that makes him slow down. And Pesce from France who was tailing him climbs on top of him. Tilloca is last, while the crash involves Jeleniowski who is 11th … S 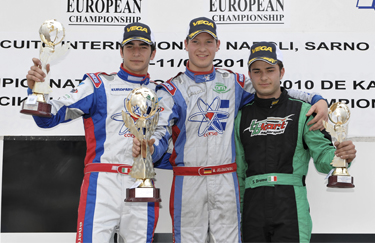 o the race changes aspect and for a while excitement drops too. De Conto maintains the lead, in second place come the Dutch driver, Leijtens (always on Energy) then out of the blues comes Zanchetta, who is the fastest together with Garcia and Tilloca. DR standard-bearer seems to be the one who has the most to give, but once he’s behind Listens he doesn’t strike the final blow. Because the Dutchman doesn’t press hard he allows Pizzuti to queue behind the duo. And Pizzuti doesn’t think twice, he takes Zanchetta who rubbed up the wrong way for being attacked hits back when the race is almost over, at the most difficult point of the circuit, at the big turn that comes out to the finishing line. Contact with Pizzuti is inevitable so once again, Brenna makes the most of the confusion and gets podium place again: Pizzuti can do no better than fifth… Zanchetta is eighth.