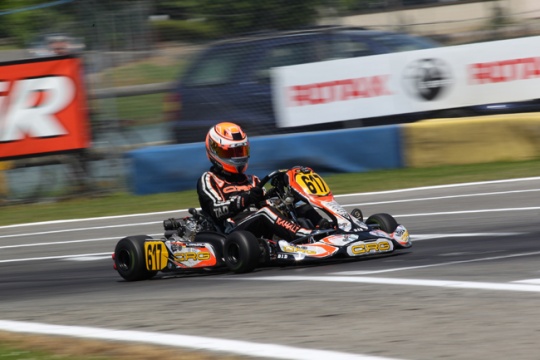 Press Release by: CRG
The Rotax Max Challenge is about to start in Spain with the Winter Cup to be held in Campillos. CRG will get to this appointment with a renewed team having great chances in all categories.
The Rotax Max Challenge is starting its sporting season this weekend with the Winter Cup 2015 of Campillos (Spain). CRG will field a renewed and very strong lineup in Senior, Junior and in the performing DD2.
Team CRG-Rotax led by Martin Reuvers with the support of HRS Racing Engines for technical development of engines, has already given a first bite of the potential of the Italian outfit in the States in the opener of the Florida Winter Tour. CRG will now get on track in Campillos with the full lineup having great chances in all categories.

CRG TEAM IN CAMPILLOS
SENIOR. CRG will field the strong English driver Harry Webb in Rotax Senior, as the Euro Rotax Senior reigning Champion will be joined by the other British Edward Brand, who took the podium in Florida after a comeback race and ended third in the Euro Rotax Senior held last year. CRG will also line up the Spaniard Mauricio Van Der Lean in Senior.
JUNIOR. CRG team for Rotax Junior will be made by the Briton Alex Quinn, who was fifth last year in the Euro Rotax and among the protagonists of CIK-FIA international races, and by some other interesting youngsters like the German Phil Doerr, the Israeli Ido Cohen and the Spanish Kilian Meyer.
DD2. The Champion Paolo De Conto will defend CRG colors in DD2 this year: he will certainly be among the main protagonists of this season too. Together with De Conto, the DD2 lineup will also include Luca Kamali, who has been under the spotlight last year, the Russian Igor Mukhin in DD2 Master and his fellow countryman Ryasnov Semen.

After the Winter Cup of Campillos to be run next 15 February, the Euro Rotax Max Challenge will follow with its four rounds scheduled for 5 April in Salbris (France), 31 May in Castelletto (Italy), 26 July in Wackersdorf (Germany) and 6 September in Genk (Belgium).