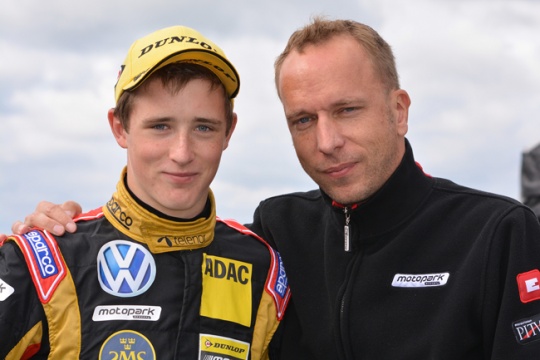 Press Release by: P1 Racing Services
Young Swede Joël Eriksson has extended his contract with Team Motopark and will join the outfit’s new Formula Four branch.
The domestic Formula Masters in Germany is history. From 2015 onwards, the beginner series for rookies from karting will be replaced by Formula Four: new chassis from Tatuus, 1,6-litre turbocharged engines by Abarth, again supporting the German GT-Masters series for GT3 cars – Team Motopark has been working to aquaint itself with the new class ever since October, 2014, when the cars first became available.

Now, one of the most successful teams in the history of Formula Masters has signed it’s first Formula Four driver. Sweden’s Joël Eriksson stays loyal to the team for another year after having joined Team Motopark for last season’s Formula Masters.

Eriksson is the younger brother of Jimmy Eriksson, himself a successful GP3 and LMP2 sports car driver who undertook his first steps in single-seaters with Team Motopark. „We’ve got a long and trustful relationship with the Eriksson family,“ says Timo Rumpfkeil. „They know that we take good care of their guys and give our everything to turn them into mature professionals. Such a matter of trust is especially important for young graduates from karting, as they are often very young and inexperienced. So when the parents know the team is good for them, that’s already a very important step for things to come. We have seen what Joël Eriksson ist capable of last year, which was still his scholarship year. Now, we set out to make im as successful as his older brother. He’s sure got what it takes for that.“

“I’m really looking forward to racing in the German F4 championship this year, and it was always my intention to do so with Team Motopark,” says Eriksson. “We enjoyed a very good relationship in ADAC Formel Masters last season, and we’re all ready to take it to the next step in 2015. We’ve already gone through the basics of the new car in winter testing, and I think we’ve got every reason to be optimistic for the year ahead. My aim is to fight for the title, and while I appreciate that it certainly won’t be easy, I do believe that to be a fully realistic ambition.”

Timo Rumpfkeil: “ We are very pleased to continue the long-lasting cooperation with the Eriksson family and their sponsoring partners OMNILINK that successfully began with Joel's older brother Jimmy back in 2007”.