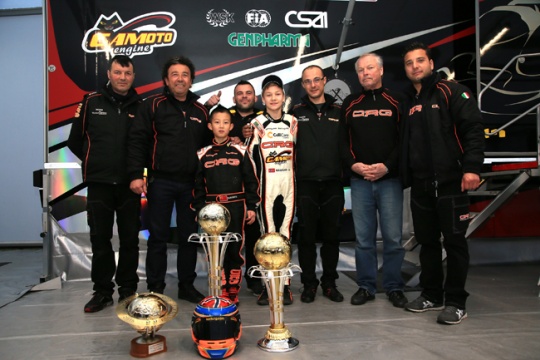 Press Release by: CRG
The young Norwegian driver secured the title of champion in the WSK Champions Cup at the end of an exciting final. Good race for Leonardo Marseglia in 60 Mini and for Muizzuddin in KF Junior. Van Leeuwen and Team CRG Keijzer shine in KF.
Team Gamoto had a great start of the season for CRG colors as it won the title in 60 Mini at the WSK Champions Cup with the very young driver Dennis Hauger, who is getting more and more competitive and absolute protagonist of the category on the CRG/Hero chassis.
The International Circuit La Conca of Muro Leccese (Italy) housed the double round of the WSK Champions Cup on 1st and 8th February, races that crowned the Norwegian driver Dennis Hauger champion of 60 Mini thanks to the victory scored at the end of an exciting and decisive Final and to the third place obtained in the Prefinal.  Hauger also ended third in Final and fifth in Prefinal of the first round held on 1st February.
Hauger showed great speed starting from qualifying, where he has been a strong protagonist setting the second time in the first round of the WSK Champions Cup and the fifth in the second. From there, he then recouped well in the heats claiming a victory and two second places that launched him on top of the provisional classification first and then to the deserved success in the Final and in the Championship's classification.

THE OTHER PROTAGONISTS OF TEAM GAMOTO ON CRG
Among the other protagonists of team Gamoto on CRG chassis, Leonardo Marseglia came also to the fore thanks to the fifth place in the first round. He has been battling the victory out in the second round until the last lap when he eventually had to settle for P6 at the end of an heated final sprint to the line. Marseglia ended the WSK Champions Cup in fourth position.
The Malaysian driver Muizzuddin Musyaffa Abdul Gafar, on CRG, is doing a good apprenticeship in the higher category KF Junior together with the youngsters of team Gamoto. He defended himself very well throughout, ending the WSK Champions Cup in sixteenth place.

VAN LEEUWEN TO THE FORE IN KF
A great performance in KF has been put in by the Dutch Martijn Van Leeuwen, who has been fielded by Team CRG Keijzer Racing, in the second round. He ended seventh in the Final on CRG-Tm after battling for the top positions in Prefinal, when – while holding P3 – he has been involved in an incident that slowed him down.
The Romanian driver Dionisios Marcu, on CRG-Parilla, ended his effort in 20th place in KF after a quite unlucky double round.