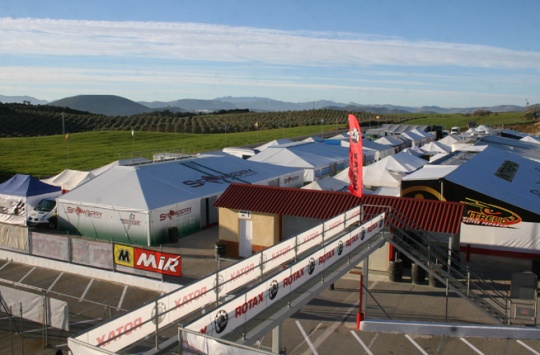 Press Release by: RGMMC
From 9th to 15th February 2015, the traditional ROTAX Winter Cup is ready to kick off the year's first trial of strength.
For the sixth time this prestigious karting event will welcome the international ROTAX scene on the Spanish karting track of Campillos near Malaga. The 1.588 metres long circuit with its long straight and some spectacular up- and downhill passages is a challenging track with most professional infrastructure. Moreover southern Spain normally makes for best climatic conditions which are expected with about 16°C at this time of the year.
Since its debut in 2010 the Winter Cup has proved to be the perfect preparation for the upcoming ROTAX racing season. Organised by RGMMC Establishment – the host of the popular ROTAX Euro Challenge for eleven years now – the event guarantees most experienced standards and professional processes in every way.

"Love, passion and commitment are the ingredients making our events outstanding. The unbroken popularity from all around the world confirms our efforts. We are proud to offer the best, most innovative and original international ROTAX kart racing series for more than eleven years now", quotes Roland Geidel, RGMMC CEO and James Geidel, RGMMC head for the course of events, adds: "In order to maintain the high and ambitious standards, RGMMC never rests but always takes the next step. I think our drivers and teams will love our upcoming ideas for 2015."

And obviously they do! Over 100 drivers from over 25 nations coming from all over the world entered the event, turning the Winter Cup into a small world championship with the highest level of competition. This year's balance of power is particularly unpredictable: After ROTAX just introduced its brand new Evo-engine everyone is excited to find out about the current state of affairs since Campillos will mark the first racing appearance of the new engine generation.

More than 40 youngsters will go for the junior category, which will be the biggest class at the Winter Cup. One expects to welcome a lot of newcomers, since many former juniors made their way up to the seniors. But drivers who remain in junior category will have half the battle. The UK drivers Alex Quinn (CRG SPA), Jack McCarthy (Strawberry Racing) and Dzianis Slavinski (M Racing) from Belarus are only three examples of experienced drivers who belong to the circle of favourites as they already look back on a successful year 2014 in the ROTAX Euro Challenge. This applies to Marta Garcia (MGL Racing) from Spain. Maybe the lady driver and local hero will manage the big surprise at Campillos.

In DD2 Belgium's Xen de Ruwe (Intrepid Driver Program ) is in a favourite role. He already won the Winter Cup two times and is aiming for his third victory in 2015. Yet he will be given a hard time: Italy's Paolo de Conto recently switched to CRG SPA and strives for the first success in his new team and Hungary's Ferenc Kancsar wants to underline the joint force of Birel, ART and KMS (BirelART-KMS). Last but not least there is ROTAX record champion Cristiano Morgado (Dan Holland Racing) from South Africa. He is not only the top candidate in the Masters category but could make for a top result in the overall classification of the DD2.

With a full grid the senior category promises a great show. Numerous former juniors, such as the Dutchmen Max Timmermans (Vici Motorsport) and Richard Verschoor (Team TKP), will debut in the highly competitive class challenging the established drivers. The man to be beaten will be Harry Webb from the UK. The reigning Euro champion won the Winter Cup already in 2013 and is ready to repeat his victory. But there is an unknown factor: Newly racing for CRG SPA, Webb still has to prove his talent within a new surrounding. Probably Webb's hardest opponent may come from his own squad: Edward Brand switched for CRG SPA, too, and completes the new double spearhead for the Italian manufacturer. On the other hand the multiple champion team of Strawberry Racing has two strings to its bow: Pierce Lehane from Australia and Josh Price form the UK should not be underestimated and aspire towards the Winter Cup triumph.

In addition to winning the prestigious title of the Winter Cup champion 2015 there are valuable prizes waiting for the drivers. In each class the winner will be given a free season in the Euro Challenge 2015, while the runner-up gets two free races and the third placed driver one free round. Summing up the 2015 edition of the ROTAX Winter Cup promises to become a spectacular event and a thrilling season opener, which will be the foretaste for the twelfth season of the ROTAX Euro Challenge 2015. More information regarding reports, photos, results and live TV stream are available on the official websites www.rotaxmaxeurochallenge.com or www.rgmmcmedia.com.