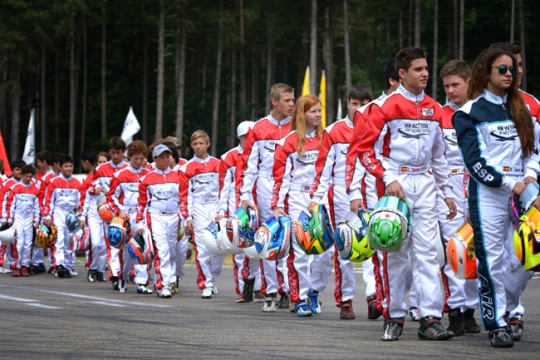 Press Release by: FIA Karting
After an exciting 2014 season, the CIK-FIA Karting Academy Trophy may well be sold out this year. Of the 51 places available, many have already been filled by the 35 nations that have entered so far.
The only global competition of its kind, CIK-FIA Karting Academy Trophy has proved its worth by revealing talents who later reached the highest levels of karting before succeeding significantly in cars. The Monegasque Charles Leclerc, winner in 2011, and the British driver Benjamin Barnicoat are two good examples.

With chassis fitted with FIM one-make engines provided by Parolin engines and random swaps, the CIK-FIA Karting Academy Trophy offers the best value international Competition in karting, the most open and least expensive in the world. In 2015, for its sixth season, the CIK-FIA Karting Academy Trophy again sees young hopefuls from many nations compete equally. Following on from 2014, this season is about to break new popularity records. Interested ASNs shouldn't waste any time in selecting their national representative.

In addition to its complete and strictly identical karts, the CIK-FIA Karting Academy Trophy revolves around several key concepts. All participants will receive an overall featuring the FIA ​​Action for Road Safety logo, graciously made available by MIR along with a pair of gloves. They work under identical tents, 4.5m by 3m. Drivers must have an International C Junior license and be born between 01.01.2000 and 31.12.2002. Any Driver who has been ranked in the top 15 of a previous CIK-FIA Championship in a Junior category (CIK-FIA World / European KF-Junior Championship) is not allowed.

Fuel is delivered by Panta, while the 2015 Option type tyres come from Bridgestone for a cost of €165 including tax for a set of slicks and €185 including tax for rain tyres. For the first meeting of the season, three complete sets will be permitted, two for free practice and one from qualifying until the finals. For the other events, two new sets and a one used will be allowed, including a new set and a used set for free practice and a new set from qualifying until the finals.

The entry fee, including complete kart rental, overall and gloves, remains at €2,095 for the three races of the 2015 season, plus a deposit of €600. Drivers must arrange their own mechanic and have their own tools.

With a maximum of 50 nationalities and an entry reserved for a female driver selected by the FIA Women in Motorsport, the places are likely to be in high demand. The CIK-FIA advises ASNs not to delay after the opening of registrations on 2nd February. Drivers from countries without CIK representation can register directly.

For questions or additional information from the ASN, Drivers or Competitors, please contact the CIK by email: cik@fia.com