Author: Vroomkart International
Getting ready for the new season, Peter de Bruijn explains his programme and strategy to be protagonist in 2010. After all, he can count on three aces up his sleeve – PDB Racing Team, Maddox, and the renewed allegiance with Iame, also in KZ – to beat the competition in all major events, gearbox included. An explicit warning to everyone! Report S.Murtas / Photos Vroom Archive
What’s new for 2010?
Not much will change compared to 2009. We have decided to support only one driver in KZ, Jack Hawksworth, because we fell we have a very good potential in the gearbox class. Jack used to race with us a couple of years ago, and we are confident he can do very well as he’s a very good driver. Also, it was just by coincidence that Nick joined us on a perm 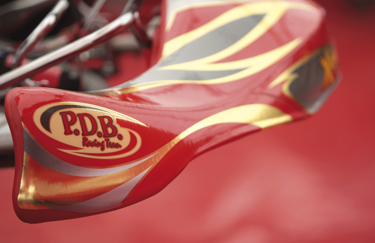 anent basis and this is going to be a big help. He was asked by Lucas Auer, one of our Maddox drivers in KF3, to be his mentor and he will take care of him for the whole season.
And we want to insist on this: we will concentrate on giving the best support to our customers, in line with what we’ve done in the past.

Business as usual or do you envisage a harder season?
This year it will take a bigger effort from our part because the racing calendar is longer and there are more races than before. Especially in the WSK, where I have a dozen customers, some want to do the Master Series, some others want to do the Euro Series. We will have to find the best way to serve our customers at our best, optimizing and maximizing our effort. For the events where we will have many drivers we will be present with the big awning and hospitality – i.e. the Margutti Trophy, the German Championship and so on – but in other events we are forced to go with a smaller environment. It’s a decision we were forced into by the multiplication of events. I feel that this complicates our life quite a bit, and part of the responsibility has to be on organizers as I believe they’re not aware of the problems teams like mine have to deal with.

How is your business strategy working?
We have been in business with the Maddox only one year now, and I have to say that I’m quite satisfied with it despite the difficult economic situation last year. We have increased the number of our dealers, we are active in all categories with both products, there has been a lot of interest in the Maddox, which has not however interfered with the Gillard business.
Our two main tasks this year are to make sure both teams are financially healthy, in order to be able to have an advantage in 2011, and to get results in the gearbox class. 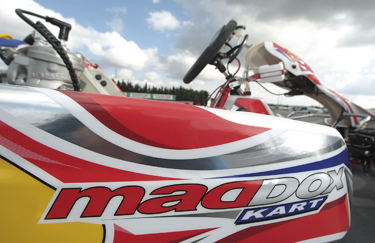 You renewed your allegiance with Iame. How’s the testing been?
We have decided to continue with Iame because of our long lasting, successful relationship. Tests proved promising, we are confident we have a very good engine, particularly in KZ. I don’t want to say too much, but you will be surprised. I’ve been requesting Iame to make a gearbox engine for several years, even when Mr. Grana was still involved with Iame, and now I have it. But this doesn’t mean that all my drivers will use Iame. Some customers might prefer different engine and it’s alright with me.
If we want to beat the other engines manufacturers, with Iame we have a very good chance.

Will engine tuners make the difference also in 2010?
Yes, this has always been the case and I don’t it will ever change. But this doesn’t mean that the same tuners will keep on being the best. We will work very hard, just like everybody else. We will work closely with Iame, my engine tuner and my carburettor specialist, an old friend of mine who used to race in gearbox in the past.

In terms of categories, which one are you getting more requests for at this early stage of the season?
For the moment we have more drivers in KF3, but I’m quite sure that in a month time we will have many drivers also in KF2 because my customers from Russia will join the team. You see, quite often the problem is that many drivers after KF3 move up to race in formula cars, and there aren’t enough good drivers to race in KF2.

Besides the WSK, what will you concentrate on this season?
Maybe I’m a little bit old fashion, but for me the World Championship and European Championship are the major events. 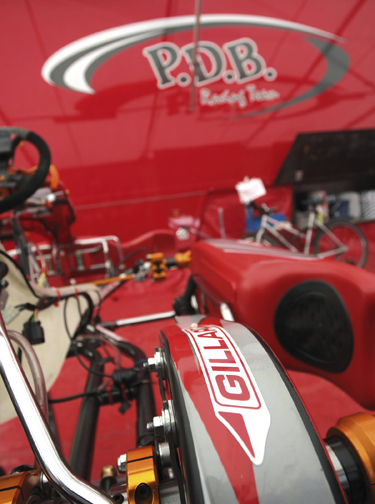 What’s your take on the new Under 18 CIK World Championship? Will you enter the event?
So far I received only one request for the U18 World Championship... maybe the idea behind it is very good. I do know that sometimes we are a bit conservative towards new programmes, but I don’t think it’s good for people like us. There is simply no market. We need to get money to provide a service to our customers, but according to this new championship I can’t charge any money. Maybe the programme is intended for private drivers, because I don’t it will get support from factories and teams.

Do you think the technical support will be delegated to the local importer or distributor?
The way I see it, they are trying to recreate the old approach to the sport, when drivers used to put the kart on the top of the car and go to the racetrack, like 30 years ago. But is it really viable? You see, nowadays we have new requests. Drivers want to go to the track, pay a team, rent the equipment and race. From a business point of view, the U18 championship doesn’t look very interesting.
Having said that, I’m going to enter this category because if it works I want to be involved.

Besides your PDB and Maddox business, are you involved in other karting activities?
Yes, I’m involved in a project together with Michel Vacirca sponsored by the Dutch federation to bring new drivers in the sport, something like a karting school. We will keep an eye on the drivers, have a three day course and try to teach them how to be faster, but it won’t be under PDB or Crg, we will be there as personal assistants.
The most important thing is to find new promising drivers for the sport.