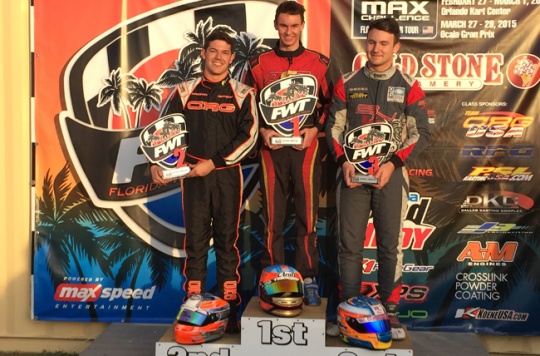 Press Release by: CRG
The circuit Homestead-Miami Speedway (Florida) housed the opener – first of three rounds – of the American series Florida Winter Tour. Among CRG drivers, De Conto put in a great performance ending 5th after fighting for the victory.
Forè ended 10th. Ed Brand confirmed to be among the main interpreters of Rotax Senior crossing the line in second place.
The first of the three rounds of the Florida Winter Tour took place in Homestead (Florida), near Miami. A lot of strong drivers did not miss this first chance of the year to challenge other top-drivers on track in the Rotax Max Challenge programme.
The Rotax weekend has been particularly exciting at the fast circuit Homestead-Miami Speedway. With 200 drivers on track, surprises have not gone missing. Paolo De Conto made his debut with CRG colors showing great competitiveness in Rotax DD2 and has been racing for CRG USA together with Davide Forè, while the British driver Ed Brand competed in Rotax Senior instead.

EXCITING DE CONTO IN DD2
Paolo De Conto set the second quickest time in qualifying being only 22 thousands of a second shy of Lennox. He later on was third in Prefinal ending in Nick Neri and Jordon Lennox-Lamb's slipstreams. De Conto finally put in a great show in the Final fighting for the victory until when he was hit from behind and pushed down to P14. Nevertheless, he started a spectacular comeback setting the quickest lap of the race and crossing the line in fifth place. Davide Forè ended eighth after holding P6. The Final went British driver Lennox's ways who led his American team mate Nick Neri and the French Antony Abbasse. The fourth place went to the American Gavin Reichelt, who was fielded by CRG PSL Karting.

Behind Paolo di Conto, the sixth place was obtained by Douglas Lundberg, who was followed by Robert Wickens (Maranello), Arnaud Kozlinski, Nicholas Latifi and Davide Forè.

GREAT START FOR BRAND IN SENIOR
Great debut with CRG for the Briton Ed Brand in Rotax Senior. He closed his effort with the second place in the Final after being second also in the Prefinal, ending behind the American Kile Kirkwood in both occasions. Brand led the Final for the first 5 laps but then he slipped down to P6 due to a contact which forced him to start a comeback race eventually ended in P2. The third place went to Dan Roeper. The Canadian Christophe Paquet, also on CRG chassis, ended tenth after starting from P16 instead.

The next two rounds of the Florida Winter Tour are scheduled for March 1st in Orlando and March 29th in Ocala.