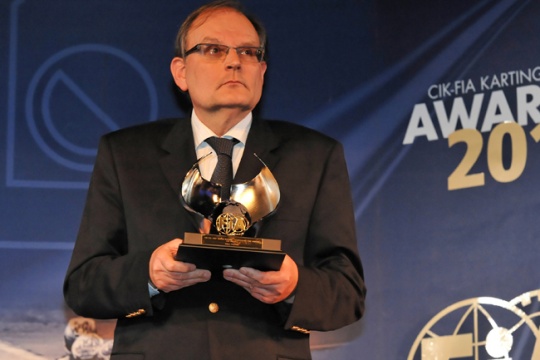 Press Release by: FIA Karting
The objective of a driver is to cover a distance as quickly as possible. But a fast time does not suit me as Vice-President of the CIK-FIA. Frankly speaking time flies too quickly and 2014 has gone by like a qualifying lap. Very fast!

Looking back on the past twelve months I realize that I could have done with more time, on the other hand a lot was achieved so I suppose that the balance was right and no time wasted.

We enjoyed very successful championships with entries at a similar level to the start of this century despite the fact that the world has not recovered in full yet from the economic crises. The introduction of wildcards for drivers who would like to enter just a single race boosted the grids. I am confident that the reduction of the entry fees, shorter events and tyre limitation helped as well.

The effort put in by the CIK-FIA staff in Geneva on the Academy Trophy was rewarded with all available slots on the entry list taken up by drivers representing no less than 32 ASNs from all around the globe. With the Trophy winner only decided after the last lap of the final event, one could not have wished for more competitiveness. A proof that the Academy is working well is the fact that Brazil is adopting the concept in 2015.

In general driving standards improved thanks to strong cooperation between the stewards, the race director and race control. However we saw some extremely unfair driving. Hopefully this will be a thing of the past with the introduction of the mandatory new front fairing mount during all CIK events in 2015 for all categories.

I always said that the CIK Championships should visit as many different countries as possible. Therefore the return to Scandinavia in general and in particular Sweden was very much welcomed and the circuit of Kristianstad with its enthusiastic people a worthy addition to the calendar.

The highlight of the year to me was the World Championship event at Aunay-les-Bois. Not only because Lando Norris (KF) and Enaam Ahmed (KF-Junior) are two very talented World Champions with a bright future in front of them, or the fact that I was able to demonstrate my very noisy historic kart. No, the support race for disabled people made the difference. It did show that karting is a sport that can be enjoyed by all kinds of people regardless of their physical conditions. Thanks to Claude Gripon and his staff the event became a classic, therefore the ASK61 is the deserved winner of the “Best event of 2014’’ award.

But not all went well this year, for example it was much too long before the 2015 calendar was finalised. This can’t happen again. There is still not perfect harmony between WSK-Promotion and the CIK. The lack of respect and treatment of officials and competitors is a worry and countermeasures should be taken. The lack of commitment from some people, whether they are competitors, constructors or even Commission members, is not doing the sport any good. Criticizing is fine but providing sensible alternatives is better and fulfilling your duty a matter of good manners.

Last but not least procedures with the new direct drive engine are too slow to my liking. It takes too long to get things done and therefore we are behind schedule despite the good cooperation we enjoy from the industry.

To end on a high, those who had the opportunity to drive or see the engine in action have positively welcomed the work done so far on the new engine. It is just a matter of the finishing touches and above all regulations. If the “I‘s” are dotted in time than we can go ahead with the two demonstration races scheduled for 2015.

All in all I am looking back on a successful season and feel confident that 2015 will be even better.

Jaime Alguersuari-CRG: it's official. The Spaniard is ready to get back on track