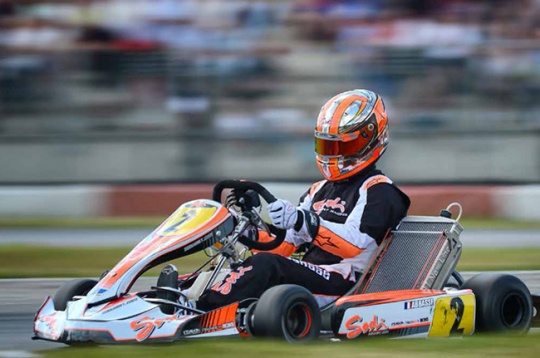 Press Release by: Sodi Kart
The world leader in karting, Sodikart has decided to work hard on demonstrating its expertise in racing. This mobilisation affects all of the links in the chain that leads to victory.
From the production unit to the driver, via the R & D department and the Racing Team organisation, the French brand has revised its ambitions upwards to increase awareness.
Bertrand Pignolet, the director of Sodikart, specifies the aims of this new policy: "For Sodi, the goal is clear: it is to prove the quality of our racing chassis with major international victories. We are convinced that Sodi has not had the recognition it deserves so far in this area. So we decided to secure the means to achieve our goal."

A solid foundation
The adventure begins with the full-time involvement of a Research and Development department which is dedicated to racing. Experience and openness are the key words. Specialising in the design of the chassis, but also in the quality of raw materials and manufacturing procedures, the R & D department constantly communicates with the Racing Team to refine its proposals according to the realities of racing. In the field of production itself, Sodikart has all the necessary skills as demonstrated by it's No. 1 position worldwide for many years.

Racing Team 3.0
Heir to the teams that put Sodikart on the top steps of international podiums since the World Championship for David Terrien in 1993, up to the success of Kozlinski in 2003-2004, the Sodi Racing Team has been revived with a reorganisation to meet the present standards with many professional drivers and commitment at the highest level both in CIK-FIA races and in Rotax.

Four top drivers and a new team manager
Sodi has not done things by half, recruiting drivers from among the top specialists. The return of Kozlinski alongside Anthony Abbasse is a strong sign. The two French drivers will line up at the top races in KZ and Rotax DD2 with great potential, and they can also be counted on to use their extensive experience to actively develop the equipment.
In Rotax Max Evo, two Grand Final winners have been hired to target the top of the category, the experienced Briton Luke Varley and the brilliant Spaniard Carlos Gil, who became famous in 2014 in Valencia.
Julien Dexmier will be responsible for taking the completely reorganised team to victory. The former kart driver has developed his skills in big teams in motorsport before returning to his first passion, karting, with solid technical and human qualities.

A full programme
After the Winter Cup at Lonato, Abbasse and Kozlinski will be out to win the CIK-FIA European and World titles in KZ, and also the WSK Super Master Series. Gil and Varley will participate in the Rotax Max Euro Challenge and Rotax International Cup at Angerville in the Max Evo category, while Kozlinski and Abbasse will race in the same events in DD2 after a warm-up round across the Atlantic in the Florida Winter Tour at Homestead. All of these drivers will be kept busy with numerous test and development sessions planned throughout the season.