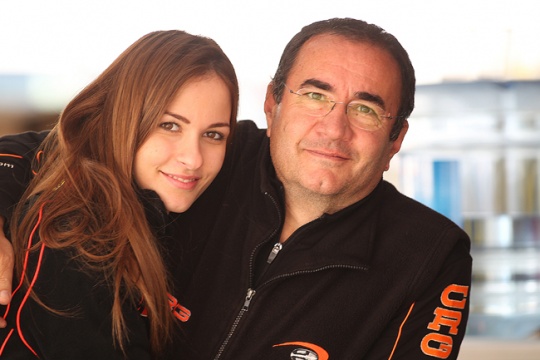 Press Release by: CRG
Paolo De Conto to strengthen the works team in 2015, but some more new-entries are also expected after Jordon Lennox-Lamb decided to follow other routes...
Very good chances in Euro Rotax with the arrival of HRS and Martin Reuvers. Novelties also in the works team's sporting management with the role took on by Glenn Keyaert, as Euan Jeffery moved to R&D. On the commercial side, an important agreement has been reached with K1 Speed for North America. The balance of season 2014 has been once again positive for CRG that has displayed a great competitiveness in all the races, even though the results obtained have not been as important as in the recent few years. In 2014 CRG won the European KZ2 title with Andrea Dalè, on CRG-Maxter, which is an even more important result as it has been achieved by a private driver.

This important result was not followed by some more due to a series of unlucky events but, as stated by CRG President Giancarlo Tinini, “not all years are the same”. Strong performances have been put in by Jordon Lennox-Lamb who came second in the Euro Rotax and won Las Vegas' S1 and the American Championship.

“This year we struggled a bit more – continued Giancarlo Tinini – and 2014 has certainly not been our best season yet, but we cannot say that it has been a disaster either. We showed a great competitiveness in a lot of occasions. For the first year, we have been competing in the Challenge Euro Rotax, where we managed to express an high level of performance laying the foundations for a good development in this category. Obviously, we aim to get a better season 2015 building on the experience gained in 2014.”

- Meanwhile, CRG welcomed the arrival of a very quick driver like Paolo De Conto, but also said goodbye to Jordon Lennox-Lamb who decided to look elsewhere at the beginning of 2015...
“Paolo is certainly one of the main interpreters of KZ in the recent years. In 2015 he will be among our ranks and I believe he will give his best to get the success he deserves. Lennox decided to go through a different path. He has received a very good offer, one to which it is difficult to say no. We are happy for him, and we are proud of having launched him among the top-drivers in the world as he has been shining with CRG since 2011. Together with Paolo De Conto, in KZ1 we will field Davide Forè who will partake to some important races. In KZ2, we will line Fabian Federer up, as well as Andrea Dalè as privateer. Most probably we are going to have some other interesting drivers we currently are talking to. Regarding KF, we confirmed  Felice Tiene, who will be sided by Pedro Hiltbrand. Some other drivers will be present too, and probably some new entries. We reached an important agreement with HRS Racing Engines and Martin Reuvers to strengthen our team in the Rotax 2015 Euro Challenge and in the other important Rotax rounds.”

- There are some Important novelties regarding the sporting direction of the team...
“Euan Jeffery, who held the role of sporting director greatly in these years, moved to that of managing Commercial R&D in 2015. This strategic role for the development of our company will have the goal of supporting and improving our sales network as well as of identifying some further partners and markets to operate on. Glenn Keyaert, who has been with us for some years now and has a great knowledge of racing and logistics, will take on the role of sporting director instead.”

- What are the novelties on CRG products for 2015?
“We will employ some new materials, but these are not big news as we already developed our products during season 2014. We believe we have some great material and are certain that we will do good things. Regarding engines, we will use Parilla in KF and Maxter in KZ.”

- In terms of tires, CIK-FIA announced the 2015 providers. What is your opinion on this?
“I never had any prejudice on companies, but I believe that it would have been possibly better if CIK-FIA had involved chassis constructors in this choice. I think we could have run some tests on track to evaluate which tire type performed better in one category or in the other, which would have given us a better choice and a more satisfactorily one for drivers. It is true that tires are the same for everyone in each category, but should drivers not be happy with them we would witness a continuous hemorrhage of drivers towards more satisfactory championships.”

- How about the new KF engines?
“I keep hearing discordant opinions, and unfortunately most of them are negative. As far as we are concerned, we will be less interested to KF and will focus mainly on KZ. In KF categories, the number of drivers has drastically decreased because the choice was taken not to simplify a motorization that is too complicated. Rule makers obviously do not have an adequate knowledge of this problem. Figures of WSK or CIK-FIA – that gather drivers from all over the world – must not be confused with those of national championships, that are true indicators of the success of a category. KF categories virtually do not exist anymore in these championships. Categories like Rotax or other single-branded championships get the most out of this situation as they keep attracting an higher number of drivers.”

- National championships are suffering more and more of this KF motorization crisis. In your opinion, what remedy could be used to invert this trend?
“The championships that work are those that do things by themselves, that is, evaluate every time if it is worthy going down certain paths. In the world there are good examples of successful Championships that managed to meet the needs and expectations of staff and drivers. Even tires choice can have a huge impact on the success of a championship. Besides brands, the right compound of a tire can attract more drivers and give more interest to a championship.”

- Business-wise, how has been CRG's 2014?
“Our trend in the last three years has been constant and, in the current economic situation, having the same numbers is already a great success. France and Germany are again the best markets in Europe. We also did a great job in China and North America, were we made an agreement with K1 Speed for 2015. This will allow us to develop a new, well-structured and capillary distribution network to provide all CRG devoted clients with high level service and great race support.”