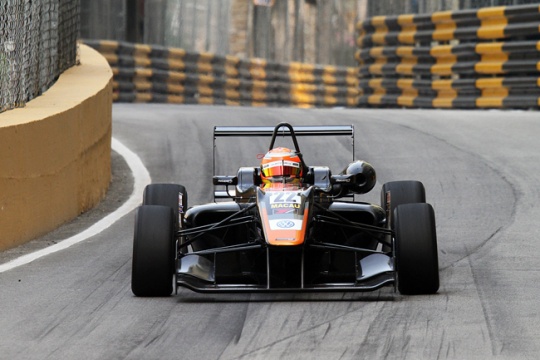 Press Release by: P1 Racing Services
Team Motopark jumps ship and starts in two new championships next year. The German outfit is the most successful feeder series’ team around. An intense preparation program is to make sure that the team continues it’s winning ways in both the European Formula Three Championship and the all-new German Formula Four series.
It’s a sunny and quiet late summer afternoon. Only very now and again, the screams of engines thunder through the tranquility. Most, a beautiful city in the Czech republic with it’s hidden raceway, plays host to one of the first  tests of the new Formula Four  adventure.
Team Motopark has taken it’s cars tot he Czech track – without knowing exactly what kind of engine will be used in the German Formula Four series in 2015. At the time of testing, there were still talks about either the 1.6 litre-Abarth or a two litre Volkswagen engine. „We didn’t want to wait for that decisison,“ says team principal Timo Rumpfkeil: „We wanted to put as many laps as possible under our belts in order to be well-prepared for the inaugural race.“
Thus, Rumpfkeil’s team gambled on gut feeling. „We chose the engine we thought the likeliest. In so doing, we were able to start testing earlier than most.“
The session in Most stands in stark contrast to the streets of Macao with it’s season-ending Formula Three Grand Prix. Team Lotus Motopark entered a car in the world’s most notorious street race for Markus Pommer, who had just won the German Formula Three Cup in a Team Lotus Motopark car.

For next year, Rumpfkeil’s outfit will enter four cars in the European Formula Three Championship as well as four cars in the new German Formula Four series. „We’re off to pastures entirely new in 2015: The Formula Three car is a whole new generation compared to the one we ran in Germany, and with the Formula Four car, nobody really knew what to expect other than a modern one-make series car.“
Team Motopark used both Most and Macao to get to grips with the new environments. Racing in South East Asia and testing in the Czech Republic laid the foundations for next season. „We learnt a lot in Macao, where Markus Pommer could have qualified in the top six easily had he managed to pull his best seccor times together to one ideal lap,“ Timo remembers. „And in the race, he started a strong charge through the field and was one of the most impressive Macao rookies.“
The extended test and race program is part of Team Motopark’s extensive and immacculate preparation work for 2015. „The Formula Three car is a completely different beast than the one ran in the German Cup – both in terms of chassis, aero and engine,“ know Rumpfkeil. „Even with our wealth of experience, we needed to learn Formula Three afresh with this car. That’s why it was so important to compete at Macao. After seeing how competitive we were there, I’m sure we can play a good role in the 2015 European, too.“

Switching back tot he international Formula Three scene will see Team Motopark return to successful territory, while taking part in the Formula Four means the outfit stays true to it’s core strength – nurturing and supporting talent from karting all the way up to the start of an international career. „There is happening quite a lot in the world of feeder series, and you really have to be right on the ball to understand what’s best for young and coming drivers,“ Rumpfkeil reasons. „Obviously, Formula Three is growing stronger on a European level, while the national series are not as important as they once were. And with the introduction of Formula Four, there is now a clear structure for young talents from karting. We as a team can provide and hold this ladder of talent: First, you test in an F4 car and get started for a full season in Formula Four. From there, you can progress into Formula Three. Given our dedicated seek-and-support program, we enable young drivers a full-on approach to the ladder of talent. At Team Motopark, they learn how the cars work; they understand how they can improve their driving by data and onboard-video studies; and they can fasttrack learning the circuits as well as vehicle dynamics on our Driver-in-the-Loop simulator. Especially the DIL is a very valuable tool, as it also compares the differences from Formula Four to Formula Three.“

Having four cars in both European Formula Three and German Formula Four means the team in itself is not only a scholarship but also a stepping stone and launchpad for an international career. „Due to our intense preparation program which started in the autumn of 2014, our engineers and mechanics now have got a solid and in-depth understanding of both the F3 and F4 cars. We know which buttons to push to make the cars go fast and to match them with the drivers’ individual styles and tastes,“ says Rumpfkeil. „We have every intention to continue our winning ways in the new environment and are sure we can provide the best education possible for the young ones.“
The first guess at Most showed how deep the team’s knowledge really is: Shortly after the test, the very engine which Team Motopark chose indeed became the official powerplant for the German F4 series.