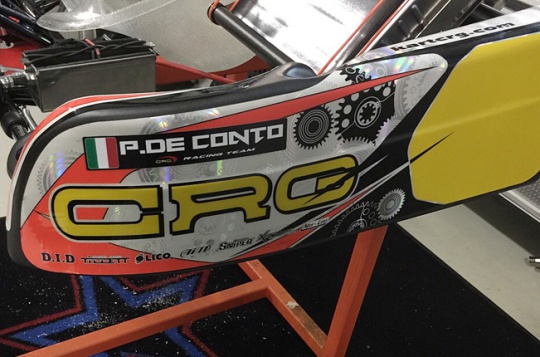 Press Release by: CRG
The Italian Paolo De Conto will be the new CRG works driver for KZ International season in 2015. He is one of the main protagonists of world karting with 2011 KZ1 European Championship and 2010's KZ2 under his belt.
CRG works team is getting stronger ahead of season 2015 with the arrival of Paolo De Conto, who is going to be a CRG works driver in KZ. This is quite an important new entry for CRG Racing Team, that aims to strengthen its lineup in KZ ahead of the forthcoming season, and also a great chance for Paolo De Conto, a very quick driver with high qualities.
Appreciated by everyone for his outgoing character and his human as well as sportive qualities, Paolo De Conto is one of the main protagonists of world karting and one of the most motivated and competitive too. He is particularly firm in overtaking moves, especially those that can turn the race events in his favour.

2014 LAS VEGAS' WINNER
Paolo De Conto ended this season putting in great performances as the recent success obtained in KZ2 at Las Vegas prestigious SuperNationals. In 2014 he also won the Winter Cup of Lonato and dominated the third round of the CIK-FIA KZ European Championship held in Kristianstad, ending the European campaign in 7th place. He has been 5th in the 2014 KZ World Championship, occasion in which he led the race for two laps in the first part of the final. In WSK Super Master he ended fifth. De Conto also competed in DD2 Euro Rotax, where he won the round of Castelletto di Branduzzo. He won the fifth edition of the Memorial Ciao Thomas Knopper KZ2 in Kerpen.

AN IMPORTANT PRIZE LIST
Paolo De Conto is in credit with good luck, he has in fact been stopped by technical problems several times when his victory seemed certain. The victory at the KZ1 European Championship of Wackersdorf in 2011 shines in his CV, as the WSK Master Series KZ1 title and the KZ2 Memorial Ciao Thomas Knopper in Kerpen won in the same year. In 2010 De Conto won the European Championship KZ2 after the two rounds of Sarno and Varennes, he then won the WSK Euro Series KZ2 and the first Memorial Ciao Thomas Knopper KZ2. In 2010 he also ended second in the German KZ2 Championship and second in the Monaco Kart Cup KZ2. In 2009 he has been second in the German KZ2 Championship and won the Bridgestone Cup Europe KZ2.