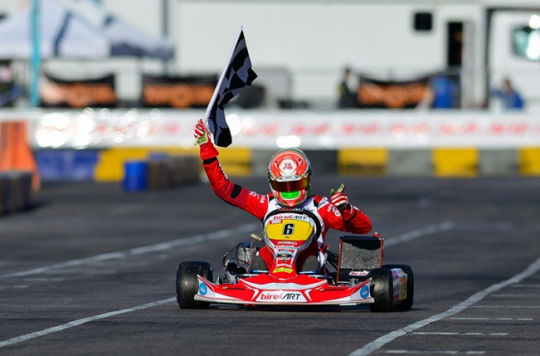 Press Release by: Birel ART
The brand new chassis by Birel ART was taken to glory at SKUSA Supernationals, the most exciting one-off race of the international calendar.
Under the flashing lights of the casinos and the loud decorations of the most outrageously opulent American city, Paolo De Conto left a permanent mark in Las Vegas by taking a superb victory in the premiere class KZ2.

Though the temporary track set up in the parking lot of the Rio Hotel & Casino is nothing like the hyper professional, high-performance circuits these guys are used to, the event is a hotspot as far as excitement is concerned.
Against some of the top competition from Europe and North America, the Italian driver proved super fast already from the early sessions, out-qualifying the opposition with a blistering fast 44”436.
Round the twisty layout and fast turns of the Las Vegas venue, De Conto went on to win the first heat, then the second, and the third too, putting a huge amount of pressure on the rivals, struggling to keep up the his top form. It wasn’t all that easy, as the Birel ART standard-bearer had to race to perfection, pushing his equipment to the limit to pile up an impressive series of quali-like laps to take the pole for the final.

As SuperSunday approached, De Conto was the favourite for the win, which did come yet not before a crowd pleasing fight against two multiple karting world champions.
After a good start, the Italian got passed by Thonon for the lead on lap 2, with Foré close behind. Turn six was were De Conto got taken, turn six was where he struck back on lap 7, taking the lead and getting chased by Foré. The fight got tough, the three continued to swap the lead for the rest of the race, until De Conto managed to break through with few laps to go and clinch a fantastic maiden victory for Birel ART at the most prestigious, crazy, mega one-off event of the season.

American typical pragmatism and business-like attitude meant that together with the winner’s trophy, De Conto was rewarded with $10,000 prize money.

Bad luck for Ulysse De Pauw in TaG Junior, the young Belgian finding himself strongly in 5th position in the final, then forced to retire on lap 3. His heat session was promising, with a 5th, 7th and 9th despite some difficulty in adapting to racing conditions never experienced before.


Ronni Sala
“It was a very intense race for us. We did a very good job, we’ve proved fastest all weekend from free practice to qualifying and also in the heats, which we won with a good margin. The final has been incredibly hard fought, a race like we haven’t seen in a long time, with De Conto, Thonon and Foré swapping the lead at each and every corner. De Conto ultimately managed to come out on top, concluding in dominant fashion a perfect weekend.”

Nicolas Todt
“To take a fantastic win with Paolo De Conto is simply amazing. Starting with such an important victory at international level is the best way to begin this partnership.”