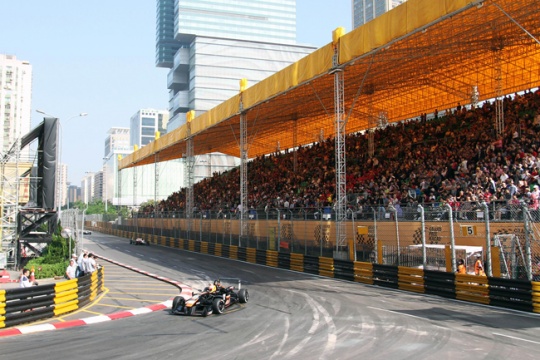 Pommer was the only German on the grid. Not only was the fast and dangerous roadcourse on the peninsula off the Hong Kong shore news to him – he also drove the new generation of Formula Three cars for the first time ever. In the end, the rookie from Heilbronn in the South of Germany came home 11th.

Following a record number of laps during Free Practice in order to learn the tricky and hilly circuit, Pommer qualified 11th. A better grid position was thwarfed by the Macau-usual red flag roulette: Every time Pommer was on course to better his lap time, another driver hit the armco, and the session had to be stopped. „Adding up the individual best sector times, Pommer would have been 6th“, said team principal Timo Rumpfkeil. „In addition to that, we had saved a set of fresh tyres  for the race.“

All hopes on a better finish in Saturday’s qualification race vanished at the start, when an overheating clutch caused Pommer to stall on the grid. He had to chase the pack from afar – but pulled off a magnificient charge to P19.

For Sunday’s feature race, Pommer was sent out on fresh rubber. But he got caught up in a multi-car pile-up at the notorious Lisboa corner. The carnage damaged his tyres and also his left-front suspension. The team had to change both during the red-flag break. „For sure, the car wasn’t in mint condition anymore,“ admits Rumpfkeil.

Pommer also suffered a bad bruising of his left hand in the crash. Driving through the pain barrier and over-riding the setbacks of a bent car on old rubber, Pommer still fought himself to 11th.

No wonder Markus Pommer was satisfied with his result: „But for the crash, we would have finished well inside the top 10. It was a great experience to mix it with the best of Formula Three, including up and coming Formula One driver Max Verstappen. We overcame the deficit of having to learn car and track at the same time and showed a strong performance.“ Team principal Timo Rumpfkeil backed up this summary: „While many other teams entered the race with two years experience under their belts, we had only done very few tests with the new Formula Three car. Markus did uncredibly well and comitted not one single mistake on what is the world’s most daunting Formula Three track. Our strong performance – especially us being  on pace for a top 6 position in qualifying – shows we’re on a very good path for our 2015 season in the European Formula Three Championship.“