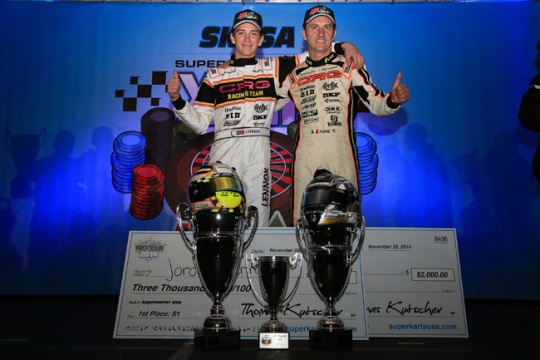 Press Release by: CRG
Jordon Lennox-Lamb on CRG-PSL triumphed at the SuperNationals of Las Vegas in category S1, leading Davide Forè on track with CRG-USA.
Lennox secured also the National Championship. Forè among the protagonists also in KZ2, where he ended fourth after leading the Final.
CRG scored a stunning one-two in Las Vegas' “Skusa Supernationals XVIII”, as Jordon Lennox-Lamb and Davide Forè ended first and second of S1 Pro, the most performing American category for shifter karts powered by Honda.

This has been a good result that awarded the competitiveness of CRG drivers and the hard work done by the two teams CRG USA and CRG PSL Karting, that brought on track a great organization and supported a high number of drivers in the categories involved in such a huge American event. This great spectacle has seen more than 500 drivers challenging each other on the track set up in the parking of the Hotel Rio of Las Vegas.

LENNOX WINNING THE SUPERNATS AND THE AMERICAN CHAMP
Jordon Lennox-Lamb and CRG-PSL Karting won fair and square in S1 Pro after an initial series of position exchanges with CRG USA's Davide Forè. The CRG pairing dominated the whole Final, with Lennox taking the lead one third into the race and crossing the line first, setting also the fastest lap of the race in a nearly parade arrival with Forè in his slipstream. This victory earned Lennox also the win of the American Championship of category S1 in an en-plein of victories that followed the success harvested in Dallas and Modesto Grand Prix. This great success was celebrated by Lennox with an original graphic design of his CRG kart and a retro style racing suit.

The quickest qualifying time of Las Vegas was set by Forè, who was also on top thanks to one victory in the two heats, while Lennox had a crescendo of results once he got to grips with the setup of his kart: he was fifth in qualifying and fourth after the heats. Fritz Leesmann and CRG-PSL were fifth in the Final as the driver ended behind Danny Formal (DR) and Nick Neri (Tony Kart). The American racer Sabré Cook on CRG-USA, has been very quick after coming to the fore in October at the CIK-FIA KZ2 World Championship held in Sarno. Sabré was 16th in Las Vegas after an excellent seventh time in qualifying, just 3 tenths shy of Forè's time.

FORE’ PROTAGONIST OF KZ2
Davide Forè has had a double commitment in Vegas as he took part also in the KZ2 event with CRG-USA on CRG-Maxter, occasion in which he also turned out to be one of the main protagonists. He was fourth in qualifying behind Paolo De Conto (BirelArt-Tm), Jonathan Thonon (Praga-Parilla) and Bas Lammers (Formula K-Parilla). Forè was fifth after the heats but put in a good comeback race that took him to the lead, before having to give some positions away at half-way through and ending in P4. The victory went to De Conto though, who dominated the whole weekend. The second place was secured by Thonon and the third by Lammers. The top ten was rounded up by AJ Myers (Pcr-Tm) in fifth, Alessandro Bressan (Comp-Tm), Lorenzo Camplese (Maranello-Tm), Phillip Orcic (Tony Kart-Tm), Kel Treseder (Energy-Tm) and Fritz Leesmann (CRG-PSL, CRG-Parilla).