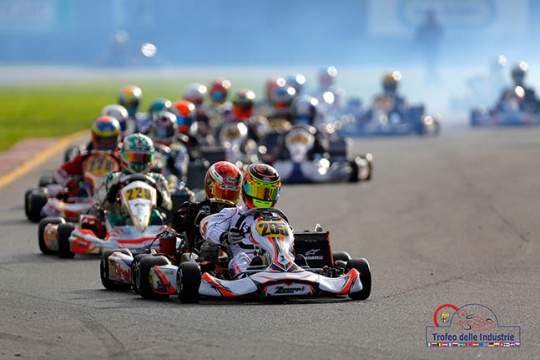 Author: Vroomkart International
179 drivers to be present in Lonato for the 43rd. Trofeo delle Industrie, race scheduled from 7 to 9 November with a lot of international protagonists in the 4 categories of the event organized by Parma Karting.
Entry lists have been defined ahead of the 43rd Trofeo delle Industrie, with 179 drivers making it to the track in the 4 categories KZ2, KF, KF Junior and 60 Mini. A lot of international protagonists present at the start of the race organized, as always, by Parma Karting to take place at South Garda karting of Lonato.

A total of 44 drivers will take part in 60 Mini, 54 in KF Junior, 27 in KF and 54 in KZ2. Among the foreign countries, Russia is going to be the most highly represented one with 22 entered drivers, while Baby Race is the team with the highest number of racers on track.

KZ2. The five times world champion and winner of the latest edition of the Trofeo delle Industrie Davide Forè, on CRG-Tm, will be present in KZ2 and will have to face other top drivers of the likes of Marco Zanchetta (Maranello-Tm), Luca Tilloca (Intrepid-Tm), the Finn Henri Kokko (CRG-Parilla), the German Maik Siebecke (CRG-Modena), as well as of other strong drivers ready to emerge like Enrico Bernardotto (Maranello-Tm), Massimo Dante (Maranello-Tm), the Spaniard Miquel Molina (CRG-Modena), Lorenzo Lapina (Intrepid-Modena), the Venezuelan Sidney Gomez (CRG-Maxter), Giacomo Pollini (CKR-Tm), the Belgian Martijn Van Leeuwen (Zanardi-Parilla) who is at the debut in KZ2 after the fifth place in the KF World Championship and the ninth in the European Championship, Alberto Cavalieri (GP-Modena), and many more like the Slovakian  Martin Konopka (CRG-Tm).
KF. Among the main contenders of KF, the Briton Max Fewtrell (FA Alonso-Vortex) of team Ricky Flynn has been competitive since his debut in KF with the second place in the recent WSK Final Cup. Also on track, the Russian Egor Stupenkov, who was fifth in the WSK Champions Cup, the Swedish Anton Haagan, the Danish Daniel Lundgaard, all on Tony Kart-Vortex. Among the Italians, Stefano Cucco (Tony Kart-Tm), Alessandro Pandolfi (Top Kart-Tm) and Gianni Vigorito (OK1-Tm) will make it to the track.
KF JUNIOR. The attention of KF Junior will be focused on the home hero Leonardo Lorandi, on Tony Kart-Parilla run by Baby Race, as well as on his team mate Giuliano Alesi, son of former F1 driver Jean Alesi. As regarding the teams, Ward Racing will line up several protagonists, among which the Russian Alexander Vartanyan on Tony Kart-Vortex, who won the Trophy last year while this year he was 7th in the European Championship and 11th in the World Championship. Team Ricky Flynn placed its bets on the American Logan Sargeant (FA Alonso-Vortex), who was second in the WSK Final Cup. Strong lineup also for team RB that will be led by the Venezuelan  Sebastian Fernandez (Exprit-Vortex), for team DR with a group of interesting Russian drivers among which Artem Petrov, and for team Energy that will line up several Russian racers too.
60 MINI. The main teams of the category will be present in 60 Mini, as the front-runners of the season will be among the ranks of Baby Race, Gamoto, Emilia Kart, Giugliano Kart, Lenzokart and others. The winner of WSK Final Cup Dmitrii Bogdanov, that of the International Final Rok Cup and of WSK Super Master Nicola Abrusci, Leonardo Marseglia and Dennis Hauger respectively third and fifth at the WSK Final Cup, Muizzuddin who won the WSK Champions Cup, the Italian Champion of the category Giuseppe Fusco and several other drivers are awaited to put in a good performance.
Results and Live Timing will be available at www.trofeodelleindustrie.it
The programme of the 43rd Trofeo delle Industrie (GMT+2):
Friday 7 November: Free Practice from 8 to 16.40; Sporting scrutineering from 12.30.
Saturday 8 November: Free Practice at 8.15; Qualifying at 9.45; Qualifying heats at 12.20.
Sunday 9 November: Warm-up at 8.30; Repechage at 11.00; Prefinal KF 11.50; Prefinal 60 Mini at 13; Prefinal KFJ at 13.25; Prefinal KZ2 at 13.50; Final KF at 14.15; Final 60 Mini at 14.45;  Final KFJ at 15.00; Final KZ2 at 15,25; Prize Ceremony at 17.00.
Parma, 5 November 2014
Parma Karting
Press Office