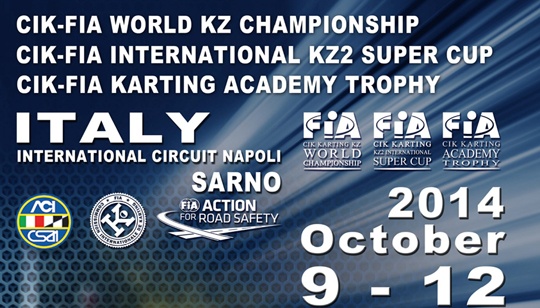 Press Release by: WSK
The International Circuit Napoli in Sarno (I) hosts, from 9th to 12th October, the World CIK-FIA Kz Championship, the Kz2 International Super Cup and the 3rd round of the Karting Academy Trophy. The Finals live on Motors TV and in streaming on www.cikfia.tv & www.cikfiachampionship.com.
The KF and KFJ World CIK-FIA titles were awarded to the British drivers Lando Norris and Enaam Ahmed and now there is only one more title to be awarded: the World KZ title. The Championship is the closing event of this 2014 CIK-FIA season, together with the International Super Cup KZ2. The events are scheduled for next weekend  on the international circuit Napoli of Sarno (Italy). On schedule also the Karting Academy Trophy, at its third and last round. Right a year ago, in France, the Dutch Max Verstappen became the KZ World Champion: Verstappen, few days ago, made his debut behind the wheel of a Toro Rosso in the F1 Japanese GP practice. It is the first time that a karting World Champion has managed to make himself conspicuous in F1 in such a narrow time span. International Motorsport, back from Japan, focuses once again on the closing event of the 2014 CIK-FIA season: there are great expectations for this World Championship and for the new World Champion. The 198 entrants, KZ drivers and also the young talents of the CIK-FIA Academy Trophy, are eager to run on the 1,699 metres of the southern Italian circuit.

The race on track and on TV
As usual, the race programme is on tight schedule: we start with the free practice on next Friday, then the heats on Saturday and, on Sunday 12th, the Finals and the prize-giving ceremony. Great news for the media coverage of the event: Motors TV is broadcasting live the Sunday's Finals. The great finale of the event, from the drivers' parade onward, will be available also in streaming on the web thanks to the production of WSK Promotion and to the two websites www.cikfia.tv and www.cikfiachampionship.com. Then, on Rai Sport 2, on Wednesday 15th, the delayed broadcast of the Finals and, on Friday 17th, the final special report.

All the big names of Sarno
It is hard to make a list of all the Champions that will race in Sarno. We could start from the new European Champions, the Belgian Rick Dreezen (Zanardi-Parilla-Bridgestone KZ) and the Italian Andrea Dalè (CRG-Maxter-Bridgestone KZ2). Besides Dreezen, there are many other talented drivers who can aim at KZ title: the Belgian Jonathan Thonon (Praga-Parilla), the Italians Marco Ardigò (Tony Kart- Vortex) and Paolo De Conto (Birel-TM), the Dutch Bas Lammers (FK-Parilla), the English Jordon Lennox-Lamb (CRG-Maxter), the Dutch Jorrit Pex (CRG-TM) and the Czech Patrik Hajek (Praga-Parilla). Good chances also for the French Arnaud Kozlinski (Intrepid-TM), the English Ben Hanley and the Italian Davide Forè (CRG-Maxter). Callum Ilott (Zanardi Parilla), after winning the KF European title, is going to make his debut in KZ. In KZ2, Dalè will have to battle especially against the Lithuanian Simas Juodvirsis (Energy-Maxter) and his fellow countryman Fabian Federer (CRG-Maxter). Let's keep an eye also on  the Czech Jan Midrla (Birel-TM) and on the German Maik Siebecke (CRG-Modena). In the Academy Trophy, the leader is the Japanese Ota Kakunoshin, just a bit ahead of the Dutch Rinus Van Kalmthout and of the Turkish Berkay Besler. The victories achieved by Kakunoshin and by the French  Alexandre Vromant in the two previous rounds could be crucial to get the Trophy.