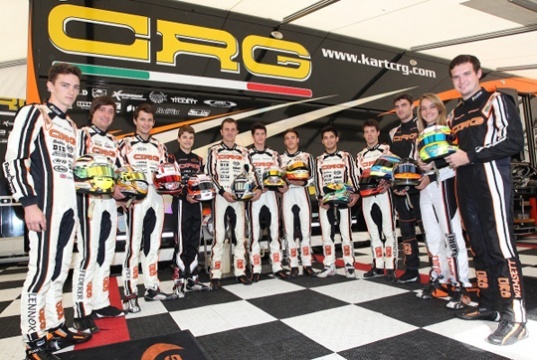 Press Release by: CRG
A series of negative episodes affected CRG's result in the KZ and KZ2 World Championship held at the International Circuit Napoli of Sarno, after the good things shown in both categories during qualifying stages.
Sarno (Italy). All what secured in the qualifying stages of Sarno's KZ and KZ2 World Championships by CRG drivers were unfortunately voided in the two Finals due to a series of really unlucky events, including incidents (a lot) and technical problems of various kinds, some even trivial.

The final result awarded at least Tinini Group, that clinched a win in KZ2 with DR chassis led by the Dutch driver Ryan Van Der Burgt, while Lorenzo Camplese got the second place on Maranello. Tinini Group has also been represented on the podium of KZ by the European Champion Rick Dreezen, who was third on Zanardi behind the winner Marco Ardigò and Flavio Camponeschi.

Jorrit Pex raised CRG hopes in KZ, but the fresh winner of the German Championship could not find a good competitiveness level and had to settle for eighth in the Final. Davide Forè started from the last place due to a technical problem in the Prefinal, but managed to recover all the way to P15 in the Final.

Felice Tiene was forced to the retirement due to an incident at lap 11, when he seemed to have the speed to slide in the leading group though. Three laps before the same fate put the word end to Jordon Lennox-Lamb's race that was cut short by a technical problem.

CRG has been quite unlucky also in KZ2 where a good result was at reach especially for the reigning European Champion Andrea Dalè or for Loris Spinelli as the two run very good qualifying heats. A lot of hopes were also put on Fabian Federer and Pedro Hiltbrand.

The most concrete driver was eventually the Spaniard Pedro Hiltbrand, who managed to get into the top ten with a good P9.  Federer was instead stopped by an incident, that also involved Dalè.

The American girl Sabré Cook has been a nice arrival for the whole team. She was at the debut in the World Championship after shining in USA races. Sabré managed to gain access to the Final with a very good P17 in her Prefinal, but, unfortunately, bad luck hit also the young driver from Colorado in the initial stages of the Final due to a trivial inconvenience to the spark plug of the engine which forced her to the retirement.

André Reinhard and Sidney Gomez could not earn the pass to the Final instead. The American  Joey Wims ended 22nd.

Euan Jeffery, team manager CRG: “This has been quite a tough weekend in both categories. We were affected by a lot of bad luck in KZ2, mainly due to the incidents. We were up in front with Federer, Hiltbrand, Spinelli and Dalè but at the end of the day we did not manage to score an important result. In KZ our level was very high, but we have been stopped again by incidents. We have now to focus on the final races of the year and, most of all, on the next season.”