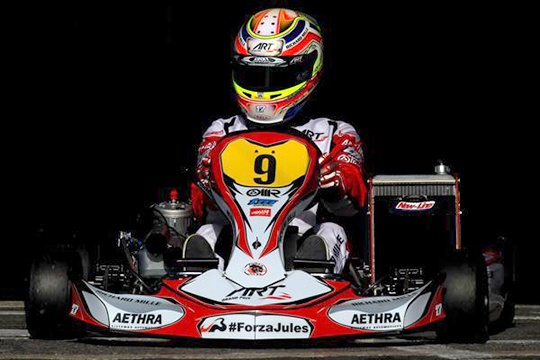 Press Release by: Art Grand Prix
In the highlight event of the season for shifter karts, with everyone still shaken by the terrible accident involving F1 star and friend Jules Bianchi only a few days before, ART Grand Prix was protagonist of a gutsy, yet unlucky performance with its drivers, above all Ben Hanley.
In KZ, with high hopes following the promising performance at the European Champs, the fast Brit stops the 5th fastest time of his group in qualifying, yet overall he’s only 16th, meaning he would have to start both his heats from P11. Not a tragedy, but not even the ideal grid position ART Grand Prix and Hanley hoped for.
In the hot southern Italian weather, Heat 1 proves an anti-climax, with Hanley out on lap 2 due to mechanical problems that effectively wreck his weekend. The experienced Brit is not phased out, if anything is even more determined to make it a weekend to remember. And Heat 2 proves it, as Hanley closes in 4th with the second fastest lap of the race to his credit.
P21 for prefinal start is a tricky grid position, and so it proves as the lights go off. Hanley gets hit hard from behind, gets tangled up with a couple of drivers as a result and is forced out.
Hanley’s unrelenting driving though comes out in the final, when the talented Brit has a clean start, avoids contacts and starts his gigantic comeback. From P32, Ben moves through the field mercilessly, and by lap 3 he’s already 24th. A few more laps and he’s in the top-20, already an outstanding achievement in a class where all rivals are extremely competitive and overtaking is as tough as it gets. As for everyone in the team, racing for Jules is the extra motivation that takes Ben to the top-15 by halfway through the race, and to P11 at the chequered flag after stopping the second fastest lap of the race.
Despite the regret that the podium could have been well within reach, Hanley’s outstanding performance is one of the highlights of the World Championship weekend.


In KZ2, the ART Grand Prix boys contribute to the message of hope to Jules with some gutsy performances. British driver Sam Webster and Czech Zdenek Groman are the fastest of the lot in qualifying with the 12th and 34th fastest lap respectively. To Webster’s unlucky first heat where he finishes at the back of the field following a contact while strongly in 3rd, follow three top-10 finishes and one top-5 to start the prefinal from 12th. Groman also proves fast, closing twice in 10th and twice in 11th, but a DNF in the third heat where carnage ensues at the green lights push him down the order for the prefinal.
More contacts at the start of the prefinal hinder Webster’s ability to fight in the top group, forced instead to work his way through the field after dropping to the rear. P16 is the best he can achieve, just making the top-17 cut to access the final. In the other prefinal, Groman has a good start, makes it to the group fighting for the top-10, but halfway through the race a contact forces him out of the top-17, and it’s back to square one. Thankfully, the race is still long and the Czech is able to close in 16th place.
Starting from row 16, the ART Grand Prix duo is called to yet another heroic showing, and the final is nothing short. The start goes better for the Czech driver, who jumps straight to 20th in the first lap. Webster also makes up positions, and the remaining 17 laps are a street fight to climb up the order. But with tyre wear also coming into play after the rough prefinals, Groman and Webster can do no better than 18th and 20th respectively at the chequered flag.
Armando Filini (Team Manager)
“We leave Sarno with the regret of having the speed for a podium finish in KZ, yet with a concrete feeling of accomplishment after the high performance level we displayed. We were always among the fastest, but we definitely lacked some fortune on the occasion. We are happy to have honoured the most important competition of the season with some fantastic driving from all our drivers, and we dedicate this weekend to Jules who is still fighting for his life. Forza Jules.”
ART Grand Prix next race
02-11 WSK Final Cup, Adria International (ITA)