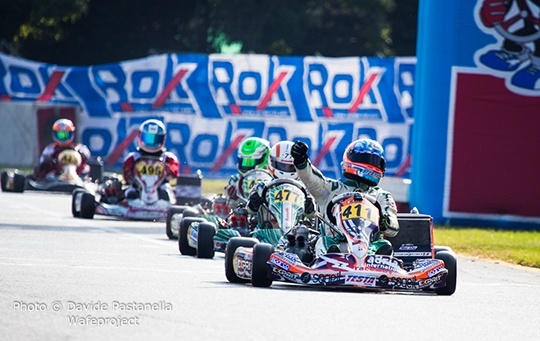 Over 300 drivers flocked to the 12th edition of the Rok Cup International Final, the season grand finale of the single-make series by Vortex which traditionally runs in Lonato. This time the Italians were able to come out on top in four of the five categories present. But let's see how it went.
In MiniRok, despite a bad start Nicola Abrusci pulls off a fabulous recovery all the way to the leading group headed by Leonardo Marseglia, Giuseppe Fusco, Nigel Desanctis and Mattia Michelotto. A tough fight full of contacts that ultimately favours the brilliant comeback and final victory of Abrusci, as well as the third place of Sandre Skeed in 3rd behind Marseglia.
In the Junior final Michal Kasiborski, Domenico Cicognini and Cristian Comanducci fight it out among themselves, with the latter initially in command as Cicognini is forced to comeback after a bad start. Once Cicognini’s recovery is complete, the fight with his fellow countryman ultimately benefits the Polish driver as the two Italians hold each other with passes and counter manoeuvres. So the final sees Kasiborski first followed by Cicognini and Comanducci.
The Rok class saw another Pole, Jan Krencisz, try every trick in the book to stop Giovanni Albanese. But the Italian had already disposed of a group consisting of Angelo Cutrupi, Gigi Calafato, Marco Bonfanti and Szymon Szyszko, and there was nothing to stop him. Behind him, the Norwegian Roland Ulrik Pedersen completed his comeback and managed to finally contain the Polish Szyszko for 2nd place.
An accident on the first lap which saw Andrea Moretti as the victim - without serious consequences - has resulted in the "slow" sign to be shown in SuperRok, with Stefano Villa Zanotti leading on Riccardo Cinti. But at the restart half lap was enough for Cinti to take the lead and never look back till the end. While Zanotti, who dropped down to fourth, had to fight with Alessandro Vantini and Enrico Pillon before he could recover the second position ahead of Pillon.
Finally, in Shifter, the gearbox category, the South African Nathan Parkins failed to meet the expectations after the heats, as Gianmarco Ercoli had to defend hard the first position from a charging Paolo Bonetti. The two also came in contact without consequences, but in the end Ercoli was first on the line by a mere 3 tenths ahead of Bonetti, with Cristian Lepore right  behind.