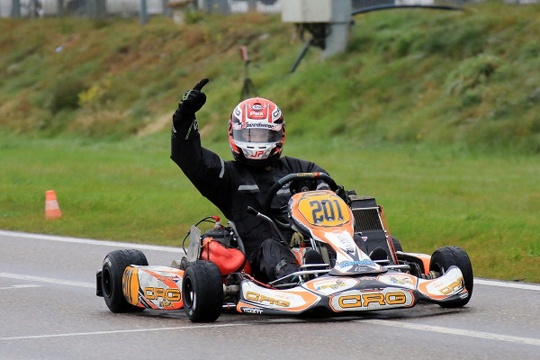 Press Release by: CRG
Jorrit Pex got a poker of wins in the KZ2 German Championship. The Dutch driver managed to win the fourth Championship in a row on CRG-Tm at the last round held in Genk, winning race-1 and getting on race-2's podium.
Jorrit Pex on CRG-Tm run by team CRG Holland won the fourth KZ2 DKM German Championship in a row on the soaking wet circuit of Genk (Belgium), thanks to a stunning double podium. Pex claimed in fact a great win in the first Final and then a third place in race-2, scoring a result that highlighted the speed of the young Dutch driver as well as the winning qualities of a competitive chassis like CRG's.

Jorrit Pex hit another success and made it four wins in a row in the DKM since the winning debut in 2011 on CRG-Maxter, success that was followed by two more titles in 2012 and 2013 on CRG-Tm. In this edition, he managed to close in on his main rival, Rick Dreezen on Zanardi, at the race held in Kerpen.  Pex eventually pulled away in this final round of Genk thanks to series of bold performances. He set the pole position being 122 thousands quicker than Dreezen and scored a first and a second place in the two heats, which granted him race-1's pole position start.

Two starts were needed in race one due to the chaos at the green lights. Pex got the lead straight away though and kept it all the way through the 19 laps of the final, pulling away despite the treacherous wet tarmac, while his rival Dreezen lost some positions and eventually had to retire.

Pex settled then for P3 in the second race as he decided not to run unnecessary risks, finishing behind the two Dutch drivers Kremers and Geurts, while Dreezen collected another DNF that made him slip down to the fourth place of the final classification, falling also behind Puhakka and Kremers.

Jorrit Pex's winning season in DKM 2014 came after the double second place at Ampfing's opener, a double retirement in Wackersdorf where Davide Forè on CRG managed to win race-1, and two placings in Oschersleben, where Fabian Federer on CRG-Maxter scored a win and a second place. In Kerpen, Jorrit Pex hauled a victory and a second place that launched him on top of the classification equal on points with Dreezen, while a further victory and a third place in Genk declared him champion for the fourth time.