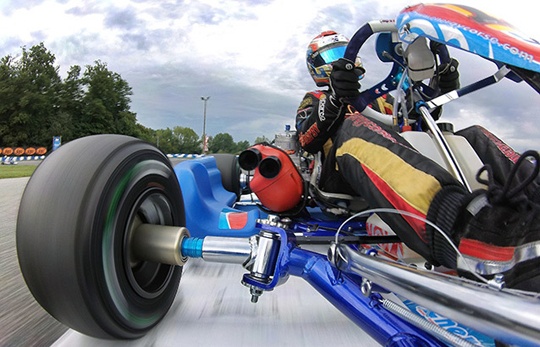 Press Release by: Energy
More than ever, the Energy Corse team is looking towards the future, to ensure progress for its drivers and get them to the top. The World KF and KF-Junior Championships held in France were another example. On the Essay-Aunay les Bois circuit, no less than seven young drivers trusted the Italian Energy chassis, with a number of encouraging performances…
The rise of Ross Martin in KF-Junior
With two podium finishes, including a victory, in the last two rounds of the German Championship, Juan Correa arrived at Essay full of ambition. Driving his Energy-TM, he performed brilliantly throughout the World meeting in KF -Junior. The American, a member of the Lotus F1 Junior Team, unfortunately had a difficult last qualifying heat and then had to make up for lost time. Despite his successful prefinal with the fastest lap and a gain of seven places in the final, he could do no better than 16th in a very lively pack.
In this category of young drivers, the expertise of the Energy Corse team allowed the Briton Ross Martin and the Lithuanian Rokas Baciuska to be among the 34 finalists, out of 89 starters! Baciuska gained seven places to finish 20th, while Martin drove an attacking race to move from 31st to 10th. Encouraging for his first race on his new Energy!
Top-10 for Roes Andersen
The Dane Casper Roes Andersen (Energy-TM) was one of the heroes of the KF-Junior World Championship, with his 2nd place in qualifying and his 7th place in the heats. This was the same position he finished in the final, where he superbly gained 18 places after a complicated prefinal. He also set the fastest lap. The Spaniard Xavier Brunet Lloveras and Dane Julius Lassen (TK Racing) had the opportunity to gain experience and to develop in this particularly high standard of global competition.
An Australian full of ambition
Perfectly prepared by the Energy Corse team, the Australian Josh Tynan learned about the the difficulty of a World Championship in the best conditions. At Aunay le s Bois, Tynan improved steadily, gaining many places in the heats. In the repechage, everything was still possible, but a skirmish at the start ruined his last hope.
"We arrived in France with a team of young and inexperienced drivers, although they were highly motivated. All gave their best and the technical team was able to celebrate the progress made by each. We are pleased to put two Energy chassis in the top 10 in KF-Junior and I think Juan Correa had the potential to do the same," said team manager Mick Panigada, who now has an eye on the International Super Cup for KZ2 at Sarno in October ...