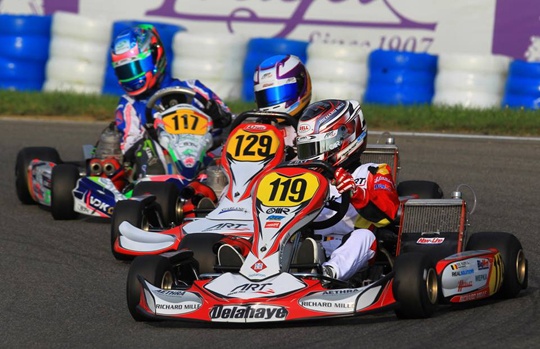 Press Release by: Art Grand Prix
The tricky French circuit registers one of the most disheartening racing weekends ever for ART Grand Prix colours. Despite the continuous evolution of the material and the introduction of two new drivers in its KFJ line up – Ulysse De Pauw and Eliseo Martinez – the team managed by Armando Filini was struck by a series of adverse circumstances that culminated with the presence of only 2 out of 12 ART Grand Prix boys in the finals.
In KF, an electrical problem hit Ben Hanley early on in the weekend. Official qualifying ended up being a disaster for the British driver, unable to set a proper laptime with the power in his engine coming and going throughout the session. Rear grid starting position in the heats resulted in the vice World Champion not able to make even the Second Chance Heat due to a penalty in one heat and a DNF in the next. Trouble was also on Julien Darras’ way. The fast French driver managed to close a heat in 5th, but two retirements at the opening lap forced him out of the prefinal.
Best of the lot was ART Grand Prix Finland Tuomas Tujula. Strong of a series of three top-10 results the Finn was not fased out by a contact in the last heat that dropped him down to 19th. Off from 14th in the prefinal, Tuomas moved up the field finishing 8th with a good chance to fight for the top-5, and even the podium, in the final. But the start proved fatal, with the Finn even unable to get going.
Difficult weekend also for fellow countryman Tuomas Haapalainen. After two top-10 results in the heats, few contacts hindered his ability to start the prefinal from a better position on the grid, ending 15th from 23rd. The second lap of the final would then see him dropping down the order and forced to fight in the rear.
In KFJ, ART Grand Prix Finland Paavo Tonteri was the standard bearer of the weekend. Hitting a brilliant 4th fastest lap in qualifying, the Finn went on to win two of his five heats, closing 3rd and 6th in the remaining, with a 17th finish to spoil his prefinal starting grid position. Fate turned its back on him in the prefinal, when first lap mayhem caught him out forcing him to drop from 5th on starting grid to 21st, and few laps later to the back of the field. Double-prefinal system - whereby the top-17 of each access the final - meant that the Finn would not race the final.
Similarly fast, and unfortunately plagued by similar fate too, Ulysse De Pauw found himself at ease on the French circuit hitting four top-10 results in the heats after qualifying 15th in timed practice. Starting 11th in prefinal 1, the Belgian driver found himself on the back of the grid already in the first lap, having to retire 7 laps later.
Two top-10 results in the heats also for Eliseo Martinez and Josh Smith, whose weekend was spoiled by few too many contacts in the remaining heats and in the prefinal.
If none of the ART Grand Prix drivers actually made it to the final, the adverse circumstances were the only unbeatable factor on the low-grip circuit in Normandy.
Armando Filini (Team Manager)
“Though I’m not a superstitious man, it looked like as though things were just not meant to go our way this time. We’ve tried to overcome difficulties, with Hanley’s kart we had an electrical problem rarely experienced before, but despite the negative results this weekend, the performance of our equipment was reassuring.”
ART Grand Prix next race
12-10 CIK-FIA KZ World Championship, Sarno (Italy)