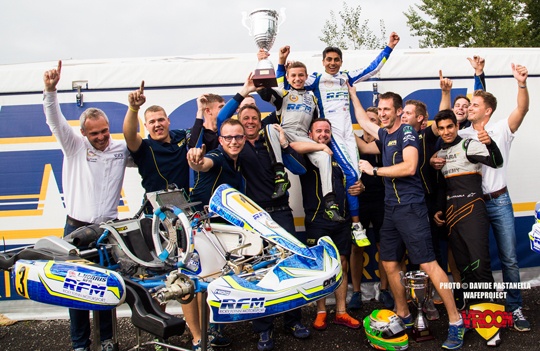 Author: Vroomkart International
The CIK-FIA World Karting Championship for KF and KFJ ended brilliantly for Lando Norris, Enaam Ahmed and Ricky Flynn Motorsport. Sheer domination that rewards the incessant work of the British team with a historic double.
In KF, Norris (FA Kart/Vortex) is fast off the green lights, but it’s his teammate Daruvala to take the lead off Joyner (Zanardi/Parilla) who drops down the field in a matter of few laps. Shadowing the leading duo, Nikita Mazepin (Tony Kart/Vortex) proves just as fast, and for 10 laps the top-3 are divided by a handful of tenths. Getting more at ease with the grip as the laps wind down, Norris manages to extend his lead, leaving the two behind to fight for the podium. The young Brit is in a class of his own, keeps focus, stops the fastest lap of the race and takes a fantastic win, doubling the one his teammate Enaam Ahmed clinched only 30 minutes before in KFJ.
Final few laps extremely intense, with Daruvala closing down defensively, and Mazepin managing to pass him in the last few corners for the vice World Championship title. Eight after the first corner from 32nd on starting grid, Callum Ilott (Zanardi/Parilla) made her majesty proud taking 4th at the flag.

In KFJ, Enaam Ahmed (FA Kart/Vortex) is just superb. He gets displaced of the lead at the start by Daniel Ticktum (Zanardi/Parilla), who gets off the second turn too confident and spins his kart creating mayhem behind. Ahmed is through successfully, back in the lead, with a gap of 1 and a half second on the group of followers led by Belgian Benjamin Lessennes (Kosmic/Parilla). Jules Bollier, Mick Junior and Kush Maini try to stay close but the damp track is as tricky as it gets. Ahmed tries to pull away, Lessennes is determined to stay close, but on lap 8 is forced to retire with technical problems at the end of mixed sector. Mick Junior inherits 2nd, but he’s not fast enough to catch up on Ahmed who flies away with a 6”5 win. Baiz (Kosmic/Parilla) makes up an awful lot of places at the start from the back of the grid, he’s in the top-5 already at the end of lap 4 and moves up two more position by the time the chequered flag waves.