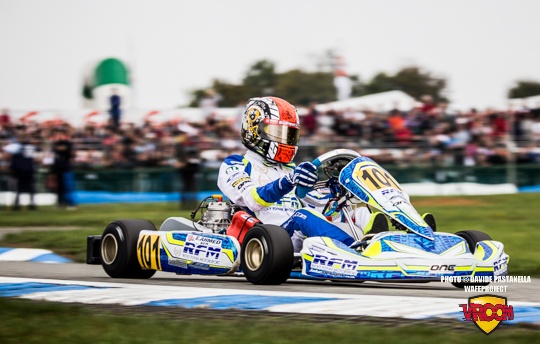 Author: Vroomkart International
The two World KFJ Championships prefinals proved truly nail-biting for completely different reasons...
The first, raced on a damp circuit with slicks, saw pole sitter Enaam Ahmed (FA Kart/Vortex) losing the lead in the first lap to Russian Sergey Travnikov (DR/Tm). The Brit was not fased out, kept cool right in the leader’s bumper and pulled off a superb pass in the mixed sector in lap 6. Within few laps the Russian had accumulated over 2” gap, and that’s how they finished at the flag.
Behind the two, Haaga (Kosmic/LKE) back on form, was shadowed and harassed till the end by outstanding novice Alex Quinn (Crg/Tm), at his second ever international meeting. Out of the top-17 (those who access the final) some of the protagonists of the heats, above all Paavo Tonteri (ART Grand Prix/Tm), Lorenzo Travisanutto (Pcr/Tm), Logan Sargeant (FA Kart/Vortex) and Ulysse De Pauw (ART Grand Prix/Tm).

The second prefinal was instead race in full wet conditions, and pole sitter Mick Junior (Tony Kart/Vortex) had anything but an easy run. After keeping the lead for a few laps, the German was passed by Leonardo Lorandi (Tony Kart/Parilla) and Benjamin Lessennes (Kosmic/Parilla), with Daniel Ticktum (Zanardi/Parilla) on their tail after an average first part of the weekend. But the Brit had more up his sleeve than anyone else, soon grabbing the lead followed by the Belgian. Artem Petrov (DR/Tm) was also in the mix, managing to complete the top-5 at the end.