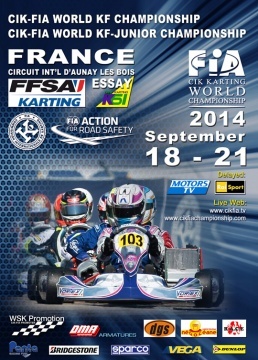 Press Release by: WSK
Next week, from 18th to 21st September, the Circuit International d’Aunay Les Bois in Essay (F) hosts the World CIK-FIA Championship on a single round for the KF and KF Junior categories. The live streaming of the event on www.cikfia.tv and www.cikfiachampionship.com
The 2014 European CIK-FIA Championship ended two weeks ago, with the titles won by the two British drivers Callum Ilott (Zanardi-Parilla-Dunlop) and Enaam Ahmed (FA Kart-Vortex-Vega) in KF and KFJ, but it is already time for a new, thrilling event. To join the competition in one of the most important event of the season, teams and drivers left the PF International in England, crossed the Channel and arrived in Normandy, in Essay (F). The town is the home of the 1,215 metres of the Circuit International d’Aunay Les Bois, which next weekend will host the World CIK-FIA Championship for KF and KFJ. It is going to be a demanding weekend for the 169 entrants: they will have to face a long selection, beginning with Friday's qualifying practice and Saturday’s heats. The pretenders to the World Title will challenge each other on Sunday’s Finals. Fans cannot miss this single round appointment in France.

World Championship in France on video
The broadcasting of the race will be available live in streaming on www.cikfiachampionship.com and www.cikfia.tv on Sunday 21st. On Wednesday 24th, on Rai Sport 2, is scheduled the delayed broadcast of the Finals and, on Friday 26th, the special report from Essay, with all the crucial moments of the event.

The protagonists in France
Drivers coming from all around the world are ready to battle to grab the title: they aim at succeeding the British Tom Joyner (Zanardi-Parilla-Dunlop) and the Italian Alessio Lorandi (Tony Kart-Parilla-Dunlop), the reigning KF and KFJ Champions, crowned last year at the final round in Bahrain. This year, the Italian driver moved to KF and, after a brilliant beginning of season with excellent results in the European Championship, he is eager to achieve victory again. He aims at taking away the Championship crown from Joyner's head who, by the way, has not achieved as much as he expected so far. However, Joyner is well determined and ready to defend the title, even though there are many drivers who stand a good chance of winning the event in France. Among them, the British Callum Ilott  (Zanardi- Parilla-Dunlop). and Lando Norris (FA Kart- Vortex-Dunlop) and the Danish Nicklas Nielsen (Kosmic-Vortex-Dunlop), just to mention the three drivers who scored the podium positions in the European Champs. In KFJ, too, the line-up is packed with talented drivers, beginning with the first three positions of the European Championship, scored by the British Enaam Ahmed (FA Kart-Vortex-Vega), the German Mick Junior (Tony Kart-Vortex-Vega) and the American Devlin Defrancesco (Tony Kart-Vortex-Vega). Among the youngest drivers of the KFJ, many other names are ready to make themselves conspicuous: drivers such as the Swedish Anton Haaga (Kosmic-LKE) and the Italian Lorenzo Travisanutto (PCR-TM), who both won one of the rounds of 2014 European Championship. There are great expectations for a gripping and full of surprises show in the North of France this weekend.