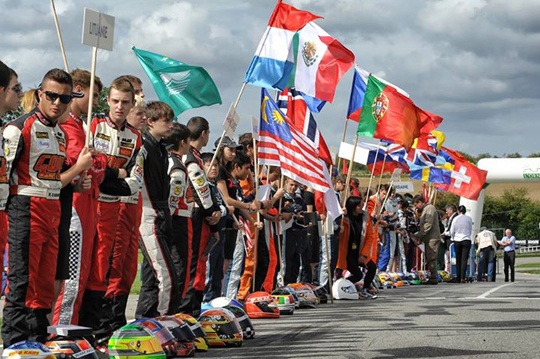 Press Release by: FIA Karting
A double CIK-FIA World Karting Championship will be held from September 17th to 21st in France, where nearly 170 Drivers from 34 countries and 5 continents will gather at Essay to attack the title in most prestigious categories of KF and KF-Junior.

The Competition promises to be of an intensity which is rarely equaled as the two World Champions will be crowned after the final race on Sunday afternoon. Although we know who the favourites are, the format of the World Competition ensures the possibility of surprises at the chequered flag.

2014 marks a return to tradition for the CIK-FIA World Championships. The non-gearbox karting category, KF, has not had a single World Competition since Kozlinski was crowned in Macau in 2009, after five Championship Competitions in 2011 and two in the 2012 and 2013 seasons, the most prestigious Competition of the year will take place this year over a single weekend at the International Circuit Aunay-les-Bois / Essay. The large amount of entries, including in KF, compared with several previous years' Competitions, indicates that the CIK-FIA choice of a single Competition for the World Championship was the correct one. Moreover, recent adjustments to the CIK-FIA Sporting Regulations have contributed to this great success.

The French track, of 1,220 metres, offers a rather unusual challenge which requires good technical skills, both on the part of the drivers and of the teams. The KF-Junior Drivers (13 to 15) will compete in their second World Championship on Norman soil.

The Essay Competition will also host the Historic Super Cup, a demonstration of perfectly preserved old karts, a living testimony to the history of the sport which recently celebrated it's fiftieth anniversary. The 1st Handikart International Trophy will also be part of the programme, an exceptional sporting confrontation which commands respect.

To get an idea of the forces involved, an analysis of the ranking of the CIK-FIA European KF Championship, which has just concluded in Britain, provides a good foundation. The overall win for the British Driver Callum Ilott (Zanardi-Parilla-Dunlop) makes him the favourite at Essay, but the European results for Denmark's Nicklas Nielsen (Kosmic-Vortex-Dunlop) and the Briton Lando Norris (FA Kart-Vortex- Dunlop) suggests a good battle. Other drivers could take revenge or assert their potential. Among the most experienced, the defending champion, Briton Tom Joyner (Zanardi-Parilla-Dunlop), seems well equipped to withstand the pressure and win, as does the Italian Felice Tiene (CRG-Parilla-Dunlop) and the Polish Karol Basz (Tony Kart-Vortex-Dunlop). Some French drivers have the ambition to shine at home, enjoying a good knowledge of the track: Gabriel Aubry (Tony Kart-Vortex-Dunlop), Paolo Besancenez (Tony Kart-TM-Dunlop) and Julien Darras (ART GP-TM-Dunlop) carry the highest hopes. But they are not alone in seeking to do battle for the title. The list of contenders must also include the Finn Niko Kari (Tony Kart-Vortex-Dunlop), Italian Alessio Lorandi (Tony Kart-Parila-Dunlop), the World Champion KF-Junior in 2013, the Spaniard Pedro Hiltbrand (CRG-Parilla-Dunlop) or the Dutchman Martijn Van Leeuwen (Zanardi-Parilla-Dunlop). We cannot overlook the chances of the British Driver Ben Hanley (ART GP-TM-Dunlop) or the Spaniard Carlos Jorge Pescador (Praga-Parilla-Dunlop), third in the 2009 European KF2 Championship at Essay. Finally, there are four female drivers, which is rare in this category, and the return to non-gearbox karts for the gearbox specialist, the Italian Riccardo Negro (Top Kart-Parilla-Dunlop).

There will not be far off a hundred Drivers in KF-Junior at the start of their CIK-FIA World Championship. Again, it is hard not to look at the results of the CIK-FIA European Championship for the hierarchy before Essay. The Briton Enaam Ahmed (FA Kart-Vortex-Vega) won against the German Mick Junior (Tony Kart-Vortex-Vega) who was increasingly combative, while the American Devlin Defrancesco (Tony Kart-Vortex- Vega), very fast early in the season, had to settle for 3rd place. Experienced, but maybe a little too big now, the Briton Daniel Ticktum (Zanardi-Parilla-Vega) is nevertheless a serious contender against the young guns, German David Beckmann (Tony Kart-Parilla-Vega ), American Logan Sargeant (FA Kart-Vortex-Vega), Russian Alexander Vartanyan (Tony Kart-Vortex-Vega) and the Briton Max Fewtrell (FA Kart-Vortex-Vega). Unlucky at European level, several drivers have the potential to do more than the numbers suggest. This is the case for the Italians Lorenzo Travisanutto (PCR-TM-Vega) and Leonardo Lorandi (Tony Kart-Parilla-Vega), the American Juan Correa (Energy-TM-Vega) and the Belgian Benjamin Lessennes (Kosmic-Parilla -Vega). The Competition seems very open and lively for the Juniors and it is not impossible that an outsider could win the Final.