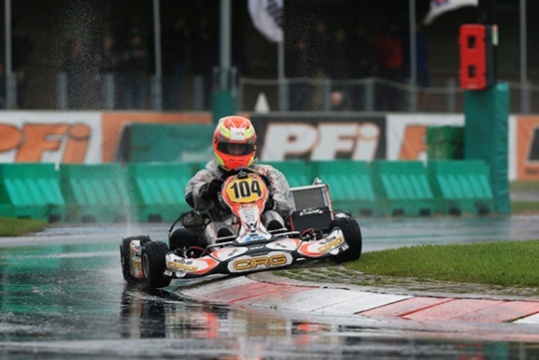 Press Release by: CRG
The International Circuit PF of Brandon is about to close the season of European Championships with the fourth round of KF and KF Junior.
CRG works team headed to England with the objective of confirming its very good competitiveness in both categories.

The fourth and final round of the European CIK-FIA KF and KF Junior Championships will take place at the Circuit PFI of Brandon in Engalnd, as the two categories will be reunited after the initial rounds held in La Conca (Italy) and Zuera (Spain), with KF heading then to Genk (Belgium) and the KF Junior continued its challenge in Kristianstad (Sweden).

All four CIK-FIA European Championships of the season will be awarded after the PFI round of August 31st. The two European Championships for categories with the shift have in fact been already decided their winners in Kristianstad at the end of July, with the titles going to the Belgian driver Rick Dreezen (Zanardi-Parilla) in KZ and to Andrea Dalè (CRG-Maxter) in KZ2.

CRG works team headed to England with the objective of getting a good result in both categories and therefore to earn a prestigious position in the final standings. The team will also get the chance to prepare at best the World Championship of KF and KF Junior that will take place in Essay (France) next 21st September.

Expectations are high in KF for Felice Tiene, who has had a great season so far but unfortunately is out of the games in the KF European Championship due to an incident he was involved in Belgium. Pedro Hiltbrand and Dionisios Marcu will also have what it takes to run a good race, as they will both compete on CRG chassis pushed by an engine prepared by KVS.

ALEX QUINN COMPETITIVE SINCE THE BEGINNING IN KF JUNIOR

The two British drivers Archie Tillett and the new comer Alex Quinn will aim to play the role of protagonists in the home race valid for KF Junior, as their laptimes are already showing the potential of these two youngsters. In the initial practice sessions Alex Quinn, on CRG-Lke, came in fact to the fore at his absolute debut in KF Junior.

All results and live web streaming will be available at www.cikfia.com and www.cikfiachampionship.com