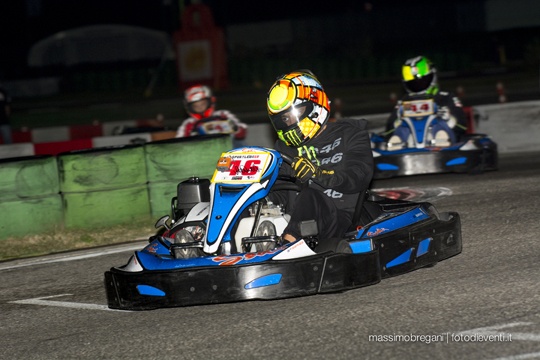 Author: Vroomkart International
On the go-kart track next to the Autodrome Santamonica, the three MotoGP stars took part to the “Spurtleda58” in memory of Marco Simoncelli.
The race, organized in memory of Marco Simoncelli for the charity foundation bearing his name, was raced on Sodikart powered by 4-stroke engines on Misanino circuit, the kart track next to Autodrome Santamonica where the MotoGP riders will be riding this weekend for the San Marino GP. The races were very intense, with Valentino Rossi and Andrea Dovizioso thrashing it from the early laps. The Yamaha rider managed to build an early advantage, but the Ducati factory rider moved up from third place taking the lead shortly after. Valentino was not to give in, and at the last lap he shadowed Dovizioso taking the win with a little budge. Third at the chequered flag Marc Marquez, who moved up to clinch the podium after a troublesome start.