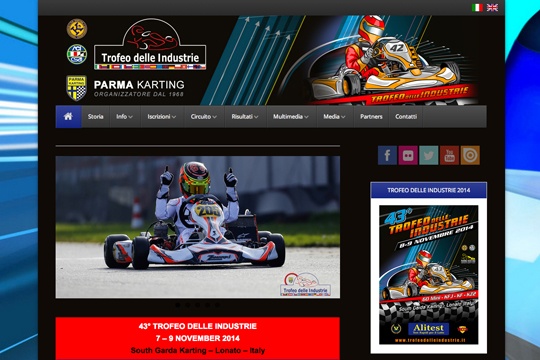 Author: Vroomkart International
Categories KZ2, KF, KF Junior and 60 Mini admitted to the race that is part of the official CIK-FIA International calendar.

The 2014 edition of the Trofeo delle Industrie – Memorial Carlo Fabi, scheduled from 7 to 9 November at the South Garda Karting circuit of Lonato (Brescia), race that celebrates this year the 43rd edition, is being prepared. This extraordinary event began at the circuit of Parma back in 1971 and is still successfully organized by Parma Karting, that moved it to Lonato in the past two editions.
The new website of the event has been devised for the occasion and it is already available at www.trofeodelleindustrie.it

Admitted categories are 60 Mini, KF, KF Junior and KZ2. Entry lists will open next October 1st and subscriptions will have to be submitted through the form available at the aforementioned event's website. The race is part of the official CIK-FIA International calendar of categories KZ2, KF and KF Junior.
Among the names of the protagonists of the 2014 edition of the Trofeo delle Industrie, the presence of the last edition winner in KZ2 and of the absolute trophy Davide Forè, on CRG, is already certain. The other winners of the past edition were Callum Ilott in KF2, Alexander Vartanyan in KF3 and Nicola Abrusci in 60 Mini.