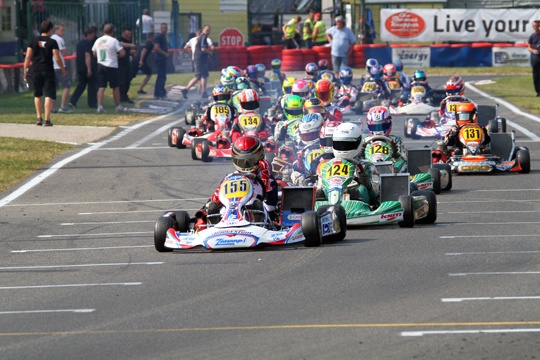 Press Release by: DKM
First decisions at the German Kart Championship are possible.
Next weekend (September 12th-14th 2014), the German Kart Championship is going to travel to the most traditional race track of the season. In the past, numerous racing careers have begun on the Erftlandring in Kerpen. 142 drivers from more than 20 nations are going to start there, among them numerous World and European Champions.
The 2014 DKM season is a great success already. During the first three racing weekends in Ampfing, Wackersdorf and Oschersleben, 145 drivers started averagely at the DMSB grade series German Kart Championship (DKM), German Junior Kart Championship (DKJM) and German Shifterkart Championship (DSKM).
In Kerpen, the most traditional race track of the season awaits the DKM drivers. The 1.013m long track was opened in the spring of 1980 and has been the starting point of many racing careers since then. For example, Formula 1 record World Champion Michael Schumacher, his brother Ralf and the fourfold Formula 1 World Champion Sebastian Vettel have learned their racing basics on the Erftlandring.
The DKM awaits filled up fields of participants for their fourth race of the season next weekend: 142 entries were counted by organizer Kart-Club Kerpen-Mannheim e.V. ADAC, which promises exciting races. Among the drivers from four continents are numerous World, European and German Kart Champions.

At the German Kart Championship, young Dutchman Martijn van Leeuwen (Keijzer Racing) is on his way towards the title. After winning the junior title in 2013, he is now aiming for the overall victory at the seniors. While his start into the season in Ampfing was a little cautious, van Leeuwen won three of four races in Wackersdorf and Oschersleben and is keeping his pursuers at bay. “So far I’m very content with the course of the season. I like the track in Kerpen and am going to fully attack again, because I already want to set the course for winning the title”, said the Dutchman highly motivated. First pursuer is British youngster Jehan Daruvala (Ricky Flynn Motorsport), who achieved a victory in Ampfing as well as in Oschersleben. Russian Egor Stupenkov (Forza Racing) and André Matisic (KKC Racing/PDB-Germany) also still have chances of winning the title. Both of them are still waiting for their first victories but have shown impressive performances so far. Matisic starts in Kerpen as reigning DKM Champion and is aiming for a place among the top three this year as well: “This year has been peppered with ups and downs so far, but we’ve always been able to find a good way and assiduously collected points.” Behind the Hamburg resident, four other fast German drivers are waiting: Manuel Valier (Mach1 Motorsport), Kevin Metzner (PM Racing Performance), Lucas Speck (ADAC Kart Junior Team) and Hannes Janker (TB Motorsport Racing Team).

The races of the German Junior Kart Championship can be expected to be extremely exciting, because it’s been a long time since things were this close together. After six ranked races, the first eight drivers are ranking in between 25 points. Since the beginning of the season, Enaam Ahmed (Ricky Flynn Motorsport) is leading the overall list of rankings. The Brit is starting at the DJKM for the first time and doesn’t have a lot of experience in Kerpen so far. Being the brand new European Champion, he is going to try to find his way back to the track of success after recent difficulties at the DJKM races – but he has to keep his opponents in mind of course. German Mick Junior (KSM Racing Team) is only one point behind; Michael Kuiper (Keijzer Racing), Maximilian Fewtrell (Ricky Flynn Motorsport) and David Beckmann are also really close. David Beckmann has shown a great catching up race since the second race of the season in Wackersdorf and has been on the pole position twice. He is still waiting for his first victory though: “After everything went wrong in Ampfing, I have improved my performance considerably since then and am looking forward to Kerpen. That’s my home track and I have already driven many races there.”

At the DSKM a first title decision is possible. Belgian Rick Dreezen (CRG Holland) is in great shape this year and, after having won the European Championship in July, is able to win the German Championship as well. With an advance of 36 points, the Zanardi driver has a comfortable head start and would make history by winning the title: After his triumphs in 2008, 2009 and 2010, he’d be the first driver to ever win the Championship for the fourth time. His opponents won’t be defeated so easily though. John Norris (Mach1 Motorsport), Jorrit Pex (CRG Holland) and Simo Puhakka (AVG Racing) are currently on the second to fourth places with the same amount of points. Best German driver Alexander Schmitz (KSW Racing Team) on fifth place is only one point behind the trio. Schmitz won both races in Wackersdorf and knows the track in Kerpen like the back of his hand: “Kerpen is my home track and I’d really like to end up on the podium there. The competition is really strong though and it won’t be easy.”

All races can be watched via DKM video-live-stream again: http://new.livestream.com/kart-data/dkm-2014-04