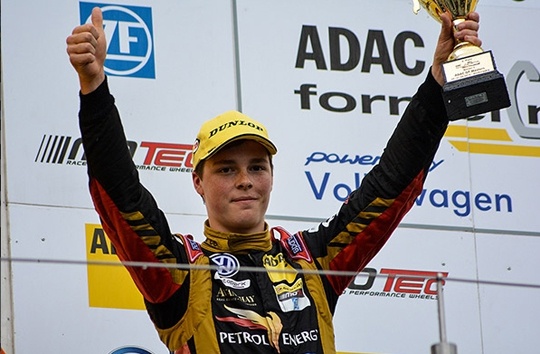 Press Release by: P1 Racing Services
In the first race, Joel Eriksson managed a good start from second on the grid and took the lead, only to lose it in close combat and finish third.
ADAC Formel Masters

Dennis Marschall, too, lost two places compared to his grid position and came home fifth. „I was very satisfied with my grid position. After all, this was the best qualifying result I ever achieved in cars,“ said Marschall. „My pace on used tyres had me hoping for more than fifth place, though.“
After a change of engine, Ralph Boschung started last. The Swiss charged as high as seventh but to retired in the pits three laps from the end.
Luiz-Enrique Breuer had to use the escape road to avoid a competitor in the melée following the lights. He rejoined last and with a flat-spotted tyre which caused massive vibrations. In spite oft hem, he regained a number of positions and finished tenth.
In race two, Boschung got a great holeshot and claimed second spot. He then collided with team-mate Marschall, which forced the latter into retirement. Boschung, meanwhile, carried on and savoured second place. „Standing on the rostrum means the world to me,“ he said. „I was very disappointment with my retirement in the first heat. The rain in race two worked very much in my favour, as I cherish driving in the wet. My experience comes in handy, as I know exactly where to start braking.“
Eriksson clung to fourth spot: „I had too much wheelspin at the start and found it difficult to drive for all the spray and puddles. Thus, I decided to not take any risks but rather bring the car home safely.“ Breuer experienced his very first wet race. He climbed up to eighth but had to concede two places in the end.
In the third heat, Marschall started last but drove a magnificent charge, through the course of which, he again suffered a collision with Boschung, which threw him from sixth to 11th. The Swiss got handed a thirty-second time penalty and thus lost his fifth position in the stewards’ office – to the benefit of Breuer, who inherited fifth spot from his team-mate. Eriksson held on to seventh in an uneventful race for the Swede.