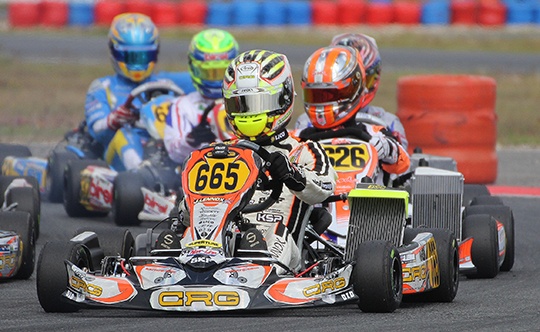 The CRG driver ended second in the Final of the fourth and last round of the Rotax Euro Challenge in Salbris, ending also second in the DD2 Championship. Luka Kamali very competitive too, as Alessandro Bizzotto.

It has been quite close, but this time the bad luck connected to a series of contacts in the Prefinal did not allow Jordon Lennox-Lamb to play all his cards in the DD2 Rotax Euro Challenge. Nevertheless, in the fourth round of the championship held in Salbris (France), the CRG driver fought like a lion and confirmed to be a protagonist of the European series obtaining a very good second place in the final classification.

CRG works team has been among the most competitive teams also in Salbris' round of the European Rotax Challenge, especially in DD2 with Jordon Lennox-Lamb, who has been in the title fight until the end, but also with the young German driver Luka Kamali – always among the best, and Alessandro Bizzotto.

CRG drivers' weekend at the French circuit Sologne Karting started quite well in DD2 as Lennox (#665) and Kamali (#617) set respectively the fourth and fifth time in qualifying, while Bizzotto (#675) was 19th. The momentum was kept in heats too, as Lennox was still in front with a victory that earned him the third absolute place, and Kamali was among the front runners in sixth.

Due to the mandatory joker of a Prefinal and a Final, Lennox would have needed to run a good Prefinal to boost his title chances, discarding the result of Genk's opener, where he had been involved in an incident. Unfortunately, a series of contacts (and then also a 10 seconds time penalty) stripped Lennox from every chance in France instead, as his direct rival – the Canadian Ben Cooper – obtained a precious P2 in the Prefinal.

The Final lived an exciting comeback by Lennox, that ended his effort with a spectacular second place behind Backman but ahead of Cooper, when unfortunately the title was already firmly in the Canadian's hands though. Lennox ended anyway second in the final classification being only 5 points short of Cooper. That was a pity for Lennox, as the CRG driver would have only needed a handful of points more in the Final (a P7 would have been enough) to secure the title.

Luka Kamali also completed a comeback in the Final as he crossed the line in P14 after starting 30th due to an incident in the Prefinal, while Alessandro Bizzotto ended 18th in the Final. Bizzotto closed 25th in the championship and Kamali 26th, despite skipping two races (Castelletto and Zuera).

Lukasz Bartoszuk (#307) has unfortunately been forced to the retirement in Rotax Senior's Final. Bartoszuk ended 16th in the championship. He scored his best results in Genk (13th) and in the third race of Zuera (12th).

The next appointment with Rotax is set for 29 November in Valencia (Spain) with the Grand Finals 2014. The event will be proceeded by the Rotax International Open scheduled in Zuera on 26 October.