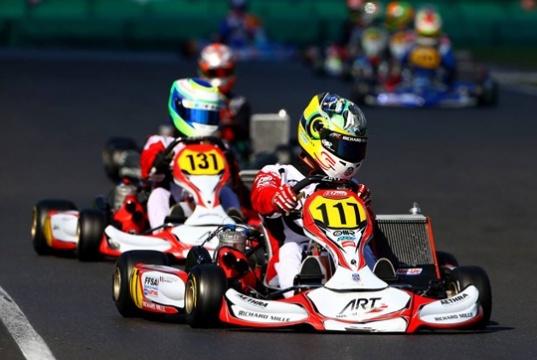 Press Release by: Art Grand Prix
Very good performances coupled with inconsistent outings marked the European Championships closing weekend of the ART Grand Prix drivers on the English track of PF International.
Standing out for the team managed by Armando Filini, Julien Darras (KF) and Josh Smith (KFJ) showed the high competitiveness of the ART Grand Prix equipment even on the UK’s most challenging circuit.
In KF, Julien Darras was the first to impress stopping the 3rd fastest lap in the wet qualifying with 1’13”641. From then on the French driver put up a solid series of results in the heats after seemingly be in difficulty in the opening one, where he dropped from 2nd to 10th by the chequered flag. Back in business for the following three heats, Darras closed twice in 3rd and once in 5th to start the prefinal from P9. Best of the rest was ART Grand Prix Finland Tuomas Haapalainen, with two outstanding performances in Heat 1 and 2 moving up from the back of the field to the top-10, also stopping the fastest lap of the race in both heats. Two more consistent heats and the Finn was ready to start the prefinal from P23. Also Moilanen and Tujula managed to get through to the prefinal with several top-10 results, but a DNF in the last heat forced Moilanen to go through the Second Chance Heat and to start from the back of the field.
The prefinal was another nail-biter, with Darras in great shape fighting for the podium in the first half of the race. Then, with his closer rivals able to make up some ground and Darras unable to step up his pace, he dropped few positions in the second part of the race closing in 8th. Superb comeback by Moilanen, up in 15th from 31st on starting grid, with Tujula and Haapalainen also improving on initial grid positions.
The extremely competitive final saw the French having some trouble after the start, dropping few places forced on a street fight in mid group. Darras tried to hold on, fighting his way back but got tangled up coming in contact with a rival, later getting a 10” penalty that would see him drop down to 27th in the final results, as Moilanen finished two positions up from initial grid.
The World Championship is only few weeks away, and with more consistency the ART Grand Prix team looks set for a fight at the top.


In KFJ, local star Josh Smith showed glimpses of his potential by lapping among the fastest drivers on track during warm-up and heats. Despite a few too many contacts, the Brit gave his fans something to cheer about when he took 5th in the third heat, making up as many as 10 positions with a stunning drive. But a 17th and a 19th in the other heats forced him to go through to the Second Chance Heat, which he dominated fighting hard at the top. Ultimately he would finish 3rd, enough to qualify for the prefinal.
Not such a good weekend instead for Adam Haikal, not at ease on the demanding British circuit, and for ART Grand Prix Finland’s Paavo Tonteri, involved in several contacts after a tough qualifying.
The prefinal was Smith’s masterpiece, the young Racing Steps Foundation driver making up a whopping 19 positions to close in the top-15. To an imposing start, Smith’s relentless comeback followed, but all his verve seemed to have run out in the prefinal, as the Brit was unable to repeat his admirable performance in the final, having to settle for 14th.

Armando Filini (Team Manager)
“Once again, the competitiveness of our equipment stood out in the hardest championship of the season. We are working to couple the performance and potential of our chassis/engine package with results, which I am sure will come in the last races of the season.”
ART Grand Prix next race
21-09 CIK-FIA World KF & KFJ Championship, Essay (France)