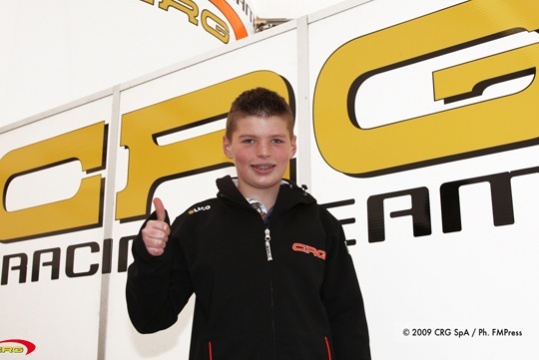 Press Release by: CRG
The young Dutch talent is ready for the 2015 Formula One debut with Toro Rosso.
Verstappen went through a professional growth path in CRG that is an excellent breeding ground for champions, following the footsteps of a lot of other drivers that have been racing on CRG chassis before becoming Formula One racers.
The news of the year came at mid August with the announcement of Max Verstappen to debut in Formula 1 with team Toro Rosso in 2015, when the young Dutch talent will only be 17 years old. This important event confirms once more the validity of karting as training ground in the recent years, as the young talents are always more and more ready to face challenge of motor racing competition.
Beyond the unquestionable maturity and skills owned by Max Verstappen, who is always followed with a lot of professionalism by his father Jos Verstappen, some credit for such a fast growth of youngsters like Max has also to go to the preparation that a works team like CRG – who has always been an excellent breeding ground for champions – can give and also to the management of karting races. Young karting drivers nowadays grow faster also because they have more chances to compete at the top levels and Max Verstappen – in force at CRG in the past 4 years – provides an example of this, as witnessed also by his successful motor racing debut this year in the European Formula 3 Championship.
Max Verstappen has been racing with CRG since his debut in KF3 back in 2010, and continued his training until becoming what he has been in 2013, that is: KZ World Champion, double European Champion in KF and KZ, winner of the KZ1 WSK Euro Series, winner of the KZ2 WSK Master Series and third in the KF World Championship after being its main protagonist. Max Verstappen's career started in Holland and Belgium when he was very young. He won all the national championships he took part in, namely Cadets, Mini and Rotax Mini. In 2010 he was hired by karting world leading constructor CRG that in the past already launched several drivers to the blue riband of Formula One, such has Max Verstappen's dad Jos, who made it to Formula One in 1994. The same path from karting on CRG chassis to Formula One was also completed by
Michael Schumacher, Alessandro Zanardi, Ralf Schumacher, Giancarlo Fisichella, Nick Heidfeld, Jan Magnussen, Giorgio Pantano, Tonio Liuzzi, Robert Kubica, Sébastien Buemi, and by current F1 drivers Nico Hulkenberg, Nico Rosberg, Lewis Hamilton, Kimi Raikkonen, Pastor Maldonado,
Giedo Van der Garde and a lot of other motor-racing champions.
In the first year with CRG, Max Verstappen made his debut in KF3 turning out to be extremely competitive winning the WSK World Series, the WSK Euro Series, the WSK Nations Cup, the Bridgestone Cup Europe, ended second absolute in the very tight Winter Cup held in Lonato, second again in the CIK-FIA World Cup and fifth in the European Championship. In 2011 he has been racing again in KF3 winning the Winter Cup and the WSK Euro Series, while he ended 14th in the European Championship. In 2012 Max Verstappen passed to KF2 and, after a season start run with another team, he came back to CRG ending second in the CIK-FIA KF2 World Cup held in Zuera and eighth in the World Championship, clinching a second place in the first of the four finals held in Macau. He has also been protagonist at his debut in KZ2 at the end of
the season in the CIK-FIA World Cup, but he was involved in an incident at the first lap while trying to get the lead of the race.
In 2013 he has kept racing with CRG in what has been his apotheosis. Despite being at the debut in the category with the shift, he won the KZ1 WSK Euro Series and the KZ2 WSK Master Series, Max then triumphed in the CIK-FIA KZ World Championship and in the KZ European Championship, winning also the KF European Championship. He set a new record for winning the double title of KZ and KF European Champion in the same season and became the youngest World Champion in the history of the highest category with the shift, KZ, in Varennes (France) on
September 22nd 2013 at 15 years and 357 days of age! His stunning results were completed by the victory in KF2 Winter Cup and by the third place in the KF World Championship after the two rounds held in England and Barhain.

A complete photo-gallery of the 4 years of successful races run by Max Verstappen together with CRG is available at the facebook page of CRG (“CRG racing team”).

Max Verstappen is a Dutch driver born in Hasselt (Belgium) on 30 September 1997, son of Jos Verstappen (former Formula 1 driver from 1994 to 2003) and of Sophie-Marie Kumpen (former international Karting driver and winner of the Andrea Margutti Trophy in 1995 in Formula A on CRG-Rotax).