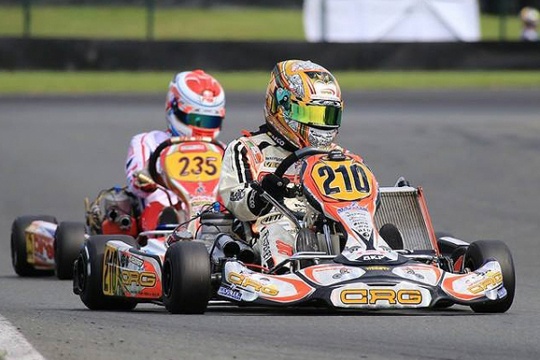 Press Release by: CRG
Fabian Federer got an excellent result in KZ2 at Oschersleben's round of the German DKM Championship on CRG powered by Maxter prepared directly by the Italian firm. He won the second final after clinching the podium in race-1.
CRG and the new Maxter MXS engine secured another triumph in KZ2 thanks to  the stunning performance put in by Fabian Federer in the third round of the German DKM Championship held in Oschersleben. The Italian driver and the CRG-Maxter pairing have been absolute protagonists in Germany with a great double podium: P2 in race-1 and victory in race-2!

The weekend of Oschersleben started with Fabian Federer under the spotlight since qualifying when he posted the fifth time behind the other two CRG drivers Maik Siebecke and Jorrit Pex, as the pole position was obtained by John Norris ahead of Simo Puhakka. In qualifying, the young driver Stan Pex of CRG Holland produced a good performance that earned him the seventh place, while the Japanese Fuma Horio secured a positive P10. The Venezuelan Sidney Gomez was also part of the CRG lot as he made his debut in the category with the shift with a 21st time.

Federer was the best of CRG drivers at the end of the heats, as he clocked a victory and a second place that earned him a front row start (from P2) in the two finals. In Final one, Federer placed again himself among the front runners and claimed the second position behind Norris, as Stan Pex crossed the finish line in a very good P4 and his brother Jorrit Pex was eighth, both on CRG-TM.

In the second Final Federer managed to give his best though and he unleashed all his competitiveness bringing a win to the CRG chassis pushed by the Maxter engine unit prepared directly by the company. He kept the lead throughout the race and fended off the attacks moved by Simo Puhakka all the way to the flag. All the other drivers were far from the leading couple and the third place was secured by Maik Siebecke on CRG-Modena, who proceeded the new KZ1 European Champion Rick Dreezen on Zanardi. Jorrit Pex ended fifth at the end of a good comeback race, while Stan Pex ended seventh. Fuma Horio was 19th in race two after  starting from the last position due to a DNF in race-1, while Sidney Gomez – who ended 17th in  race-1 – had unfortunately to retire in race-2.