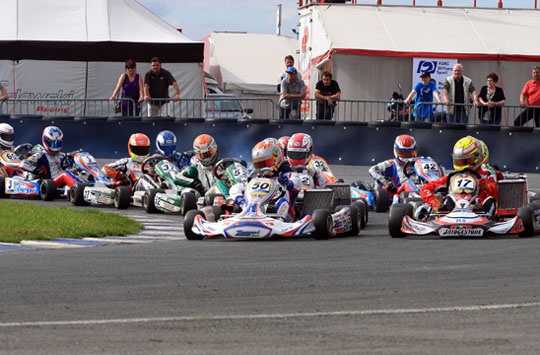 Press Release by: DKM
After a two year break, the German Kart Championship is back in Oschersleben. Next weekend the ranked races five and six of the highest German kart racing grade series are going to take place at the etropolis Motorsport Arena. Everything is still possible in the separate Championship rankings.
Oschersleben is the easternmost location on the racing calendar for the participants of the DKM. For the last two years, the grade series of the DMSB (German Motorsport Foundation) didn’t take place in the Magdeburger Boerde.
The 1.018m long track is unknown territory for most of the participants. In addition to some challenging passages, the wind shadow on the long start-finish straight is going to be most important regarding successful races. During the last years these often caused thrilling duels. Additionally, Oschersleben has a very special flair due to the proximity to the automobile circuit.

After the large number of participants in Wackersdorf, the number of participants is very pleasing this time as well. All in all, 154 drivers are going to start during the three racing days, among them numerous international top drivers. The Championships are currently led by Martijn van Leeuwen (DKM), Enaam Ahmed (DJKM) and Rick Dreezen (DSKM).
At the German Kart Championship Dutchman Martijn van Leeuwen (Keijzer Racing) took the overall lead after the last race in Wackersdorf. The reigning Junior Champion won both races and now has got an advance of 13 points to his direct follower Egor Stupenkov (Forza Racing). He is going to start accordingly motivated: “I’m looking forward to the race in Oschersleben. I’m going to fully attack again and will try to increase my advance.” Also really close behind are British Jehan Daruvala (Ricky Flynn Motorsport) as well as the two Germans André Matisic (KKC Racing/PDB-Germany) and Manuel Valier (Mach1 Motorsport). Especially the reigning German Champion André Matisic showed an impressive performance lately: “Oschersleben is kind of a home race for me. I know the track really well and am very confident about the races.”

Also very close together are the youngsters of the German Junior Championship. The first four drivers are only ranking within ten points from each other. The list of rankings is currently led by Enaam Ahmed (Ricky Flynn Motorsport) from Great Britain. Things didn’t go perfectly in Wackersdorf for the current leading driver of the European Kart Championship though. He only gained nine Championship points in Upper Palatine. Things went considerably better for his pursuers Michael Kuiper (Keijzer Racing), Lirim Zendeli and Mick Junior (both KSM Motorsport Racing Team). The two Germans Zendeli and Junior shared the victories and have a clear advantage in Oschersleben: “I know the track from the past years and really like driving there”, said Lirim Zendeli, excited for the start. As best DJKM rookie, Max Hesse (Solgat Motorsport) follows on fifth position.

At the shifterkarts (DSKM) all eyes are on the new CIK-FIA KZ European Kart Champion Rick Dreezen (CRG Holland). At the finale in Sweden he did perfectly and was thereby able to celebrate one of his biggest victories. “That was an unbelievable feeling; I’m so happy”, the Belgian rejoiced even days later. He is also leading the list of rankings at the German Shifterkart Championship. After a double victory in Ampfing, Dreezen was also able to gain points in Wackersdorf and has an advance of 25 points to his direct pursuer Alexander Schmitz (KSW Racing Team). The German won both races in Upper Palatine and belongs to the favorites in the Magdeburger Boerde as well. “Things are currently going really well for us”, Schmitz commented on the current intermediate result. Guust Specken (IRB Racing) follows on third place in front of Marijn Kremers (AVG Racing Team) and the Champion of the last three years Jorrit Pex (CRG Holland).

The event in Oschersleben is going to start on Friday with free trainings. Qualifying and the heats follow on Saturday. The 34 best respective drivers of the heats are then going to compete against each other in the final races that are going to start on Sunday from 10am on.  All races can be viewed once again via DKM video live stream at: http://new.livestream.com/kart-data/dkm-2014-03