Author: Vroomkart International
Another year has gone by, and despite the international crisis that hit everyone and everything in a dreadful 2009, we’re still alive and kicking, more determined than ever to pick it up and make it prosper.
We start 2010 with the right gear, full of energy and reporting the latest CIK-FIA engines homologations, with a first part including some of the major brands. But the cover is dedicated to the 10th successful Rotax Grand Finals, held in Sharm El Sheikh at Ghibli Raceway, which made for a fantastic 26-degree event, a true blessing for everyone stuck in northern hemisphere freezing temperatures.

The days when I used to go to nursery school and they made us do lines and lines of straight lines… in our note books… Yes, lots of “i” without dots on it, all aligned and the same height; pages and pages of marks and symbols of various sorts, so many that they’ve become indelible in my memory Times gone by, different teaching methods…
Today, I find myself looking at the line following the two XX. In Roman numeral we all know what it means, but from a symbolic point, I like identifying that line as an extra gear (one up) for our magazine. Yes, 2009 has been the most difficult year of the new millennium and maybe not only for karting. Today we are aware that one has to work hard, putting forward solid projects if you want to reach an aim.
We, at Vroom, sharing the same difficulties that the world is living, have however managed to smile thanks to the approval of readers sharing our interests. We have edited a magazine giving exclusive columns with certain nonchalance. And this is all because Vroom has a team of brilliant collaborators, experts in this field. A team of nutters, I can tell you and I’m very proud to be their chief.
One up, but it’s also true that, as on the knob on top of the gear stick of a sports car, the two lines show second gear. There you are, Vroom today, is like a high displacement sports car that has just gone into second. Yes, you’re right. What will happen when we escalate and make the most of the horsepower available? It will be even more exciting, don’t you think? Breathtaking! Yes, as from this year the issue is going to have a new sprint, and you can see this starting from this number. Lots “of flesh”, as they say in Rome.
Let’s hope that the karting industry picks up too, and offers the market the products it needs. But I’m sure that someone has already thought about this, also because there won’t be anyone selling smoke in the future. Believe me…

Again, may I wish you all a happy 2010 full of fun and excitement.
I’ll be with you again soon on Vroom 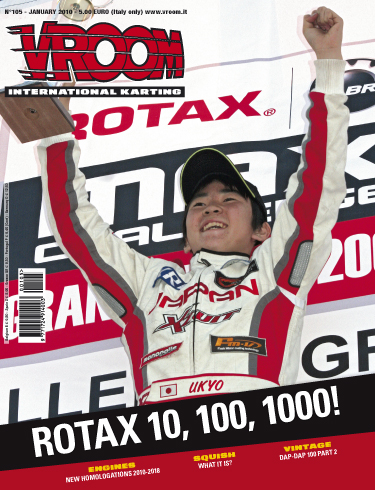 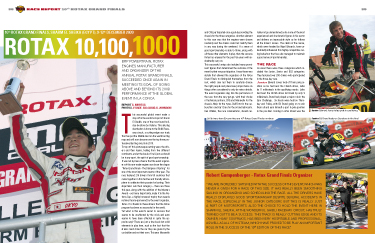 RACE REPORT - 10th Rotax Grand Finals
BRP Powertrain, Rotax engines manufacturer and organizer of the annual Rotax Grand Finals, succeeded once again in meeting its goal of going above and beyond its 2008 performance at the global event in La Conca. 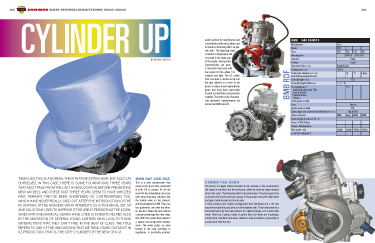 ENGINES - New homologations 2010-2018
Three years that must pass from the last homologation before presenting new models and these past three years seem to have whizzed past, perhaps they’ve been shortened by controversies too, which have never really died out after the introduction of the KF. Anyway, at the moment, what interests us is technical set up and solutions used to improve it. 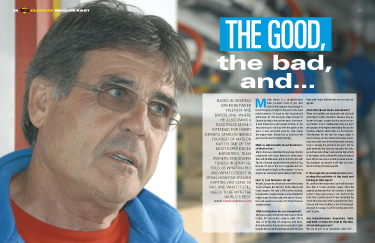 CLOSE UP - Marlon Kart
Based in Oropesa (Spain), where he also owns a racetrack mainly intended for hobby drivers, Marlon Ibanez founder of Marlon Kart is one of the most experienced importers, team owners and engine tuners in Spain. He told us what works and what doesn’t in Spain, how far Spanish karting has gone so far, and what it still needs to be with the world’s best. 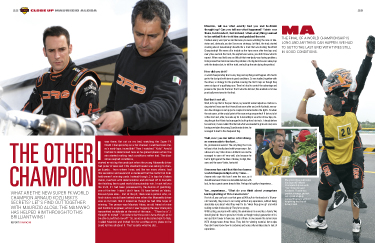 CLOSE UP - Maurizio Alosa
What are the new Super FK World Champion Arnaud Kozlinski’s secrets? Let’s find out together with Maurizio Alosa: the man who has helped him through to this brilliant wins! 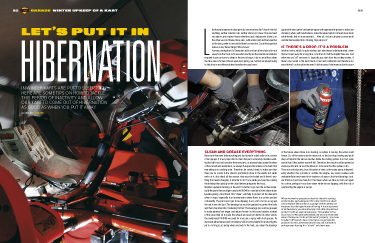 GARAGE  - Winter upkeep of a kart
In winter karts are put to sleep too. Here are some tips on how to tackle this period of inactivity and allow our kart to come out of hibernation as good as when you put it away. 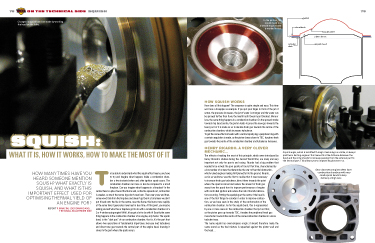 ON THE TECHNICAL SIDE - Squish
How many times have you heard someone mention squish? What exactly is squish, and what is this important effect used for optimising thermal yield of an engine for? 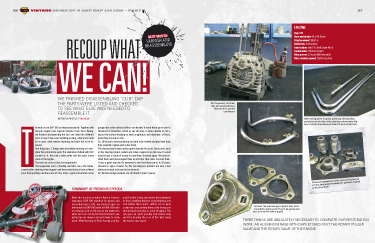 VINTAGE - Doing up a Dap Dap 100 1989 - part 2
We finished disassembling “our” DAP.  The parts were listed and checked to see what else was needed to reassemble it… 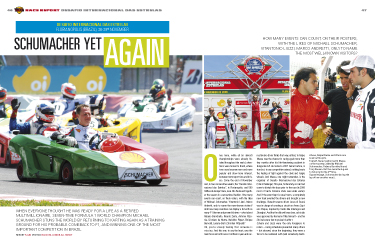 RACE REPORT - Desafio Internacional das Estrelas
When everyone thought he was ready for a life as a retired multimillionaire, seven-time Formula 1 World Champion Michael Schumacher stuns the world by returning to karting again as a training ground for his probable comeback to F1, and winning one of the most important competition in Brazil. 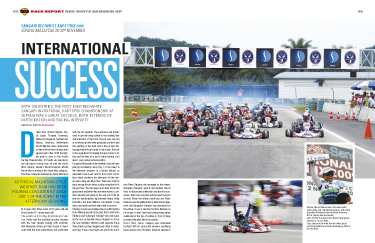 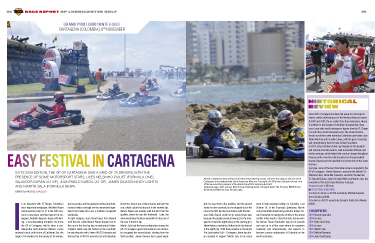 RACE REPORT - GP Lubricantes Gulf of Cartagena
In its 2009 edition, the GP of Cartagena saw a grid of 70 drivers, with the presence of some motorsport stars, likes Nelsinho Piquet (Formula One), Salvador Durán (A1 GP), Juan Pablo García (A1 GP), James Davison (Indy Lights) and Martín Sala (Formula BMW). 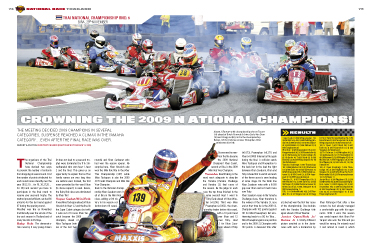 NATIONAL RACES
This month we feature the final round of the Thai National Championship, with a fantastic season wrap-up at Bira. From the USA, we feature the exciting Streets of Lancaster Grand Prix and the Rotax Grand Nationals. Last but not least, a classic in Germany with the Graf Berghe Von Trips Memorial in Kerpen.


COLUMNS – Mondokart & 2010 International karting calendar
Like every year, December is time for CIK-FIA awards, and the event in Monaco proved once again outstanding. At the same time, the CIK released the finalised calendar and the list of winners of the tenders. Also, Crg celebrated its champions in the new facility; UK FKS released the 2010 format; Birel America finalised the plans for 2010; BMB announced the collaboration with Czech KVS for the development of KF engines; PKE 2010 sets up to be the first Exhibition show of the West Coast (date 5-7 February in Las Vegas); and the 4th PRI/CKI All-Stars Karting Classic opened the PRI exhibition show in Orlando.
We close with the final version of the 2010 international karting calendar.