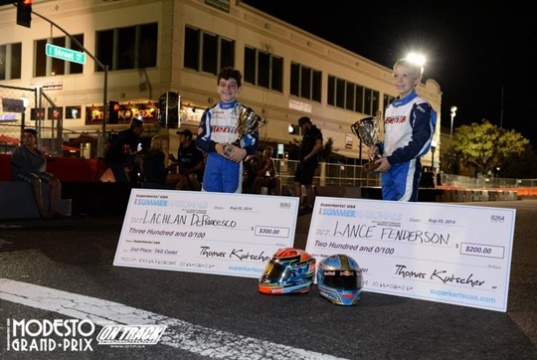 Press Release by: Benikarts
Lance Fenderson and Lachlan DeFrancesco bring home top finishes for BENIK.
August 7, 2014 - After a successful Cold Stone US Grand Nationals, BENIK Kart moved on to race in Pittsburgh, Pennsylvania at the United States Pro Kart Series (USPKS) before travelling west to Modesto, California for the SuperKarts! USA (SKUSA) SummerNationals. Continuing to prove themselves as a top power in the karting industry, even after only a short time of existence, BENIK Kart was able to find success once again as they crisscrossed their way across the country.
In Modesto at the inaugural Modesto Grand Prix, Team BENIK took on the SKUSA SummerNationals in the TaG cadet class. Lance Fenderson started his weekend very strong by claiming the pole position for Saturday's wheel-to-wheel competition, followed by teammate Lachlan DeFrancesco outside row two in P4. After an unfortunate start in 25th position for the main event, Lance laid down the fastest lap of the race and followed Lachlan's third place finish, crossing the line in fourth. Sunday's events saw DeFrancesco claim the premier starting position after qualifying, followed by Fenderson in third. The final race of the weekend would see the duo maintain the positions they qualified in, with Lachlan setting the fast lap of the main event.
Across the country one week prior in Pittsburgh, Pennsylvania at the Pittsburgh International Race Complex, the BENIK Kart team would once again put their drivers on the podium. This time competing in two separate classes, Vortex Mini Rok and Yamaha Cadet, the pair would find equal success.
DeFranceso and Fenderson's weekend began in Saturday's Mini Rok class. Lance qualified, ahead of Lachlan's unfortunate 11th position, in fourth place. The pair finished side by side in the main event, with Lachlan coming home fourth and Lance in fifth. On Sunday, DeFrancesco put in a first place qualifying effort taking the pole position, followed by Lance in sixth. In the heat race, Lachlan maintained his pole position with a heat race victory while Lance came home seventh. From pole position, DeFrancesco led the Vortex Mini Rok main event until the last corner on the last lap, where he was unfortunately passed and would fall to second, just ahead of the sixth place kart of Fenderson.
The Yamaha Cadet portion of the weekend saw more success for Fenderson. In Saturday's qualifier, Lance had unfortunate luck, leaving him in the 17th position. As would be expected, the BENIK driver moved right up to the ninth position in his first heat, and continued into seventh in the second one. The main event would lead Fenderson to a top-five finish, in the fourth position. On Sunday, Fenderson would put his BENIK Kart into the front row after qualifying in the second position before easing back into third place for the heat race and would eventually finish his day on the second step of the podium.
Also, BENIK Karts had a successful weekend at the Homestead Karting Fall Championship in Homestead, Florida where BENIK Kart drivers claimed first and second place results in the Rotax Micro Max division.
For more information on BENIK Kart, please contact Nick Mitchell or Ben Cruttenden via e-mail to Info@Benik-Kart.com or by phone at 754.206.4870. BENIK Kart can also be found online at www.-BENIK-Kart.com, Facebook at www.facebook.com/BenikKart and Twitter at @kartBENIK.