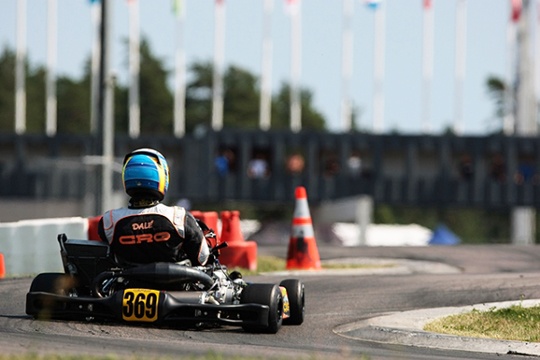 Press Release by: CRG
The new Maxter MXS engine unit that got the victory in the KZ2 European Championship is born from the collaboration with Savard and is already very competitive even in the “standard” customers version. It is ready for the charge to the World Championship.
The Maxter engine made his “reentry”, and it did it hands down. The engine's exceptional performance has been showcased in the most recent official races that ended up with the European CIK-FIA KZ2 Championship title won by Andrea Dalè on the Maxter MXS version prepared by Tec-Sav, but the strength of this new engine can also be appreciated in the standard version which is already very powerful.

The Maxter MXS unit developed directly by the Italian firm has always produced great performances with Fabian Federer, who has often been the quickest in the recent round of the European Championship held in Kristianstad. Figures are crystal clear: the Maxter MXS unit is getting solid results and is ready to charge in all the national and international championships first and in the most important appointments of the season next 12 October: the KZ World Championship and  International KZ2 Super Cup CIK-FIA in Sarno (Salerno, Italy).

CRG and Tinini Group – company that is leading Maxter – President  Giancarlo Tinini commented the success at the KZ2 European Championship with the following words: “We won the KZ2 European Championship with Andrea Dalè and we had very good results also with all our drivers, both in KZ and in KZ2. The evolution of Maxter in the MXS version gave us a lot of satisfaction since its development, that has been done by Patrick Savard. In fact, the S in the acronym MXS stands for Savard, who has been developing our engines for several years now and he has also worked at the latest evolution, that features a modified sump. We homologated this latest version last year and now we started getting great results, drivers are really happy and production started strong. We are receiving a lot of interest which makes us hopeful for the future.”

- This success is a great relaunch for Maxter engines...

“I am really very happy on the performance and reliability of the engine – Giancarlo Tinini confirmed – we are on the right way. Maxter MXS is one of the quickest engines out there in the market, even in terms of customer engines. This is very important as the standard engine is already very quick when it gets out from the factory and it can be successfully employed in races straight away. The collaboration with Savard is great, we exchange information and interventions all the time which is producing stunning results, now even with the new peparator Lilio Frizzi. This year we have been racing with engines prepared by Savard and with those prepared directly by us, and the results are quite similar, which shows we made a good step forward in terms of quality as our company can now offer top level and very competitive products to its customers.”