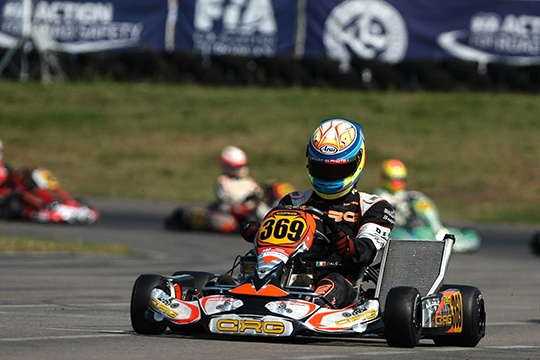 Press Release by: CRG
Andrea Dalè, KZ2
The European KZ and KZ2 Championships ended in Sweden with Andrea Dalè, privateer driver on CRG-Maxter, winning the title of KZ2 European Champion at the end of an exciting Final that saw Felice Tiene and Fabian Federer on the podium.
Jorrit Pex ended fourth in KZ, Lennox was ninth, while Forè had to retire.

The third and last round of the European KZ and KZ2 reached its conclusion in Sweden at the Circuit of Kristianstad. The balance for CRG has been really positive thanks to the performance of its drivers, to the competitiveness of the several-times victorious chassis of the Italian outfit, as well as to the excellent performance of the Maxter engine unit that allowed the privateer driver Andrea Dalè to be crowned as the new European Champion  in KZ2.

The two CRG works drivers Felice Tiene and Fabian Federer, on CRG-Maxter,have been to the fore in KZ2, alongside the new European Champion Andrea Dalè. The two CRG drivers produced in fact a spectacular final stage where they respectively claimed the second and third place in the Prefinal. They also ended on the podium of a very tight Final as in the sprint to the line they followed the Swedish driver Douglas Lundberg, with Tiene second and very close to completing the decisive overtaking move for P1 and Federer ended third.

The Prefinal seemed to have elected the Lithuanian driver Juodvirsis, fifth on Maxter, as the main title contender but in the Final Juodvirsis has been forced to the retirement, while on the contrary Andrea Dalè ended ninth in the Prefinal, but managed to put in a comeback race in the Final reaching the fifth position that earned him the points needed to secure the European Championship. Dalè totaled in fact 55 points, while Lundberg ended second at 52 as he got past Juodvirsis who did not go beyond the 50 points mark.

PEX AT THE FEET OF THE PODIUM IN KZ

The Prefinal of KZ unfortunately staged an incident that involved Davide Forè who was flawlessly put off track when fighting for top positions. That was a shame as the Italian driver was stripped from the chance of showing all his potential with the Maxter engine unit. In Prefinal, Jordon Lennox-Lamb confirmed to be very quick as he was the first of CRG drivers in fifth place, setting also the fastest lap of the race.  Jorrit Pex on CRG-TM ended eighth instead.

Lennox lost a few positions at the start of the Final and then he could not claim them back crossing the finish line in ninth place. On the contrary, Pex managed to put in a comeback race fighting for the podium. The final charts saw anyway De Conto on top, leading Hajek and Dreezen as the latter won the title of European Champion. Pex ended fourth, Yannick De Brabander was 14th, while Forè was eventually forced to the retirement after having recovered all the way to P12.

TILLET IN THE FINAL OF KF3

In KF Junior, Archie Tillett on CRG-TM, managed to gain access to the Final thanks to the seventeenth place obtained in the Prefinal. He later on ended 24th in the Final. The final round of the European KF Junior Championship is scheduled for next 31st August in England in a joint event with the last round of KF at the International PF Circuit of Brandon.

MAXTER READY FOR THE WORLD CHAMPIONSHIP

The competitiveness displayed by CRG in this European Championship is a good starting point for the most important appointment of the season of categories KZ and KZ2: the forthcoming World Championship of Sarno. The team will be heading there with the awareness of an excellent competitiveness of the latest update of the Maxter engine. This was proven in Sweden as Felice Tiene set the quickest time in KZ2 qualifying and in the Final Tiene and Fabian Federer put in very quick laps, while Jordon Lennox-Lamb turned out to be the quickest in the three qualifying heats valid for  KZ and in Prefinal alike. Davide Forè set the quickest time in the free practice instead. In other words: stopwatches answers have been excellent for CRG.