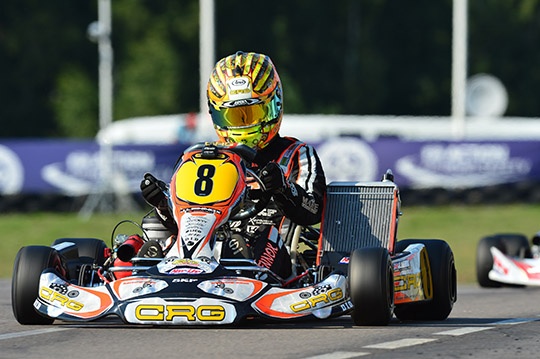 Press Release by: CRG
Jordon Lennox-Lamb, KZ (Ph. Gaboriaud)
The Circuit of Kristianstad is about to close the European KZ and KZ2 Championship campaigns on Sunday 27 July, with Lennox on CRG-Maxter among the absolute best in KZ as he set the quickest time in the three heats run on Saturday. Tiene, also on CRG-Maxter, is among the main protagonists of the KZ2's weekend. Dalè confirmed to be still in the KZ2 title hunt.

The Circuit of Kristianstad in Sweden is surrounded by the green and is characterized by several up and down-hill sectors with a “corkscrew” corner like Laguna Seca's. This is the stage of the third and final round of the European KZ and KZ2 Championship that will name the title winner of both categories with the shift on Sunday.

The Swedish track will also house the third round of KF Junior, but this category will reach its conclusion next 31st August in England at the PF International Circuit, in a joint event with the final round of KF.

CRG works team is aiming to a good result in Sweden but also to develop further some technical aspects like the renewed Maxter engine unit that is already delivering good performances and that will certainly give its contribution in the campaign for prestigious title that CRG is hunting: the KZ and KZ2 World Championship, scheduled for next 12 October in Sarno (Italy).

CRG drivers have been quite strong and positive in Kristianstad. In KZ2 Andrea Dalè, privateer driver on CRG-Maxter that got full haul in Genk, is well within the title fight. Following the Belgian triumph, the Italian driver has then lived a troubled weekend in the second round held at Wackersdorf, but in Sweden Dalè will have all his chances of getting the title intact due to the joker available both for heats and finals.

The very good performance of CRG drivers in KZ2 has been highlighted by the pole position set on Friday by a stunning Felice Tiene, on CRG-Maxter, in 51.896s. This was actually the record time in qualifying, but Andrea Dalè followed him closely at just 16 thousands of a second!

KZ performance was not any worse as Davide Forè – on Maxter engine too – was the quickest in Thursday's free practice with a best lap of 51”247s. In qualifying, Jorrit Pex, on CRG-TM has been the best CRG driver as he posted a 51.729s, but Jordon Lennox-Lamb, on CRG-Maxter, put in a good performance too worth P6 in 51.825s.

LENNOX THE QUICKEST IN KZ

Saturday's heats confirmed CRG drivers role as protagonists in both categories, despite some hiccups like Jorrit Pex's retirement in the third heat of KZ after two fourth places in the first two heats.

Jordon Lennox-Lamb has been the quickest of the CRG lot in KZ, as he set the fastest lap in all three heats, finishing third in the second heat and fourth in the third one. His quickest loop was completed in 51.673s.

Davide Forè harvested a 9th place and two seven places in the three heats Yannick De Brabander (CRG-TM) got a 12th, an 11th and then a 12th place again.

Lennox will therefore line up in the second row of the Prefinal's starting grid, as he currently stands fourth, Forè will follow him in fifth position, while Pex will get away from the seventh spot of the grid.

In KZ2 a 5 seconds time penalty stripped Felice Tiene from a second place obtained by the Italian in the first heat, which prevented him from getting an even better result. Started from the pole position gained in qualifying, Tiene on CRG-Maxter, has been the “star” of the weekend claiming P5 and the end of heats, where he also clinched the victory in the last race of the day and set the fastest lap of the race in 51.941s being the only driver breaking the 52 seconds wall.

In KF Junior, Archie Tillett on CRG-TM defended himself quite well but the Prefinal on Sunday morning is going to be crucial for the young Briton to get access to Kristianstad's Final. In the 5 heats he has been racing in, the British driver ended 12th twice, he was then 16th and 17th twice.

All results will be available at www.cikfia.com and www.cikfiachampionship.com
CRG SpA
Press Office
www.kartcrg.com
26 July 2014