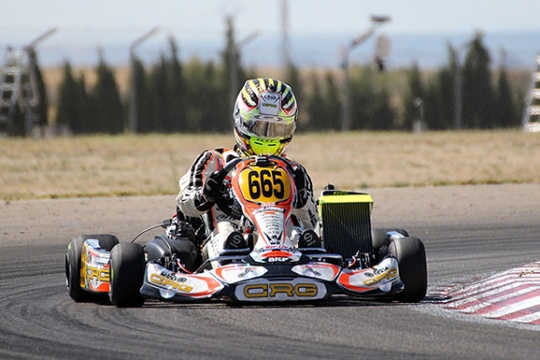 Press Release by: CRG
Photo-finish end for Jordon Lennox-Lamb in Zuera who claimed third in the Challenge Euro Rotax DD2, result that placed him 7 points short of the classification leader. The final sprint for the title campaign will take place next 7 September in Salbris (France) as Lennox put his name forward for the title.
CRG Racing Team harvested another spectacular result in the third round of the Rotax Euro Challenge held at Zuera (Spain) thanks to Jordon Lennox-Lamb. During the race, the British driver has also installed himself in the lead of the DD2 Final and at the sprint to the line he ended only 43 thousands of a second short of P2!

The photo-finish end of the race highlighted the competitiveness of Jordon Lennox-Lamb, a driver that is always quick no matter what category he is racing in, be it Rotax DD2, KZ or KF. Lennox stands now in the second place of the classification only 7 points short of the leader and the final round of the championship to be held next 7 September in France, at Salbris, will be decisive.  Lennox will have a concrete chance to get the title thanks also to the mandatory joker of a result of the Prefinals and one of the Finals out of the 8 results of the whole season.

In Spain, Lennox started his weekend with a fifth place in qualifying, a result later on confirmed in qualifying heats. In Prefinal, he claimed a very good P2 securing therefore a front row start in the Final race. At the start of the Final he was on the dirty side of the track and had to concede a few positions, but he then managed to get them back installing himself in the lead of the race. In the duel for the victory Lennox had to concede the lead and then fought for the second place eventually crossing the line only 43 thousands of a second short of P2!

Regarding the other CRG works drivers competing in DD2, the Dutch rookie Milan Dontje ended 12th in the Final after gaining four places, while Alessandro Bizzotto ended in 23rd position.

The Final was won by Sean Babington from Ben Copper to Jordon Lennox-Lamb.

BARTOSZUK AND MARCU IN SENIOR

The Polish driver in force at CRG Lukasz Bartoszuk obtained a very good 12th place in Rotax Senior, while Marcu Dionisios, had to retire in the Prefinal and later on ended 26th in the Final. The Rotax Senior Final was won by Harry Webb.

The Final round of the championship is scheduled for next 7 September in Salbris (France).

All results will be available at www.rotaxmaxeurochallenge.com