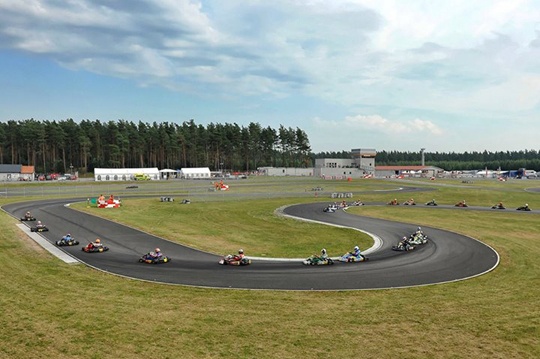 Press Release by: FIA Karting
With two European Championship titles to be awarded in KZ and KZ2, and the penultimate European Competition for the KF-Junior category, the Swedish Competition at Kristianstad starts the crucial phase of the 2014 CIK-FIA karting season.

Sweden has not hosted a CIK-FIA Competition since the European Qualifications in 2008 at Göteborg and the 2010 CIK-FIA Viking Trophy at Lidköping. The brand new circuit of Kristianstad will host the CIK-FIA European KZ, KZ2 and KF-Junior Championships and the 1231m Asum Ring is a new challenge for the majority of teams and drivers. While the young drivers in KF-Junior will have to wait until the end of August for their European award, their elders in KZ and KZ2 conclude their European campaign in Sweden. They have to drop two of their six results, their worst points standings after the Qualifying Heats and their poorer Final. This means the Competition at Kristianstad is very important for the final result.

Marco Ardigo (Tony Kart-Vortex-B'stone) won at Genk and Jonathan Thonon (Praga-Parilla-B'stone) at Wackersdorf, but Rick Dreezen (Zanardi-Parilla-B'stone) is leading thanks to his consistency, and his two second places have given him 58 points against respectively 43 and 36 for his two rivals. Dreezen is however well aware that everything will be decided in Sweden against his  two opponents. Jordon Lennox-Lamb (CRG-Maxter-B'stone) in fourth with 34 points, Jorrit Pex (CRG-TM-B'stone) fifth with 33 points and Bas Lammers (Formula K-Parilla-B'stone) sixth with 32 points will also have their say in the title race. For the event win, in addition to the favourites already mentioned, we can expect to see Ben Hanley (ART GP-TM-B'stone), Anthony Abbasse (Sodi-TM-B'stone), Arnaud Kozlinski (Intrepid-TM-B'stone) or Paolo De Conto (Birel-TM-B'stone) play an important role.

Simas Juodvirsis (Energy-Maxter-B'stone) made a big step towards the European Champion title by winning the KZ2 Final masterfully at Wackersdorf, but the fate of the Championship is far from settled. With 42 points, the Lithuanian is not safe from a reaction from Andrea Dalè (CRG-Maxter-B'stone), second with 35 points, and Sebastian Andreas Hansen (Tony Kart-Vortex- B'stone), fourth with 27 points, both of whom experienced a slump in Germany. Jan Midrla (Birel-TM-B'Stone), third with 29 points, showed potential to take into account every time, as well as Douglas Lundberg (Alpha-Parilla-B'stone), fifth with 26 points, who will have the advantage of a home race. There are four other drivers to follow given their recent performances: John Norris (Mach1-TM-B'Stone), 6th with 24 points, and Maik Siebecke (CRG-Modena-B'Stone), 7th with 22 points, who were 2nd and 3rd on the podium at Wackersdorf plus Finn Kooijman (CRG-TM-B'stone), eighth with 22 points and Simone Brenna (TB Kart-Modena-B'Stone), ninth with 22 points, who was the pole sitter and Heats leader in Germany.

The expected duel between Enaam Ahmed (FA Kart-Vortex-Vega), the leader in the provisional CIK-FIA KF-Junior European Championship with 47 points, and Devlin Defrancesco (Tony Kart-Vortex-Vega), second by only a point, could be interrupted by the revelation of the last Competition at Zuera, the Swedish driver Anton Haaga (Kosmic-LKE-Vega), third with 40 points, who will be determined to shine at home. However, we aren't lacking candidates for victory in this very competitive category. Logan Sargeant (FA Kart-Vortex-Vega), Daniel Ticktum (Zanardi-Parilla-Vega), Mick Junior (Tony Kart-Vortex-Vega) and David Beckmann (Tony Kart-Parilla-Vega) are a few from a long list of Drivers able to develop. There are also a number of young Swedish Drivers registered for the Competition with the aim of standing out in an international event, which could influence the final outcome at Kristianstad.